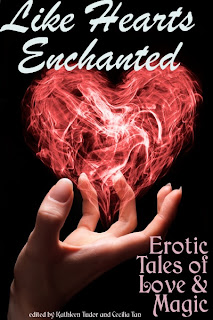 I love the cover of Like Hearts Enchanted, edited by Kathleen Tudor and Cecilia Tan. It'll be out soon from Circlet, and it includes a story of mine, "Violets." The original call described the anthology as follows: Everyone has experienced some form of unrequited love, but what if you could wave a magic wand or brew yourself a potion to turn things around? Would there be unintended consequences, or unforeseen troubles to overcome? How far would you go to bring love into your own life? Would you climb an enchanted mountain for that all-important ingredient? Or perhaps you’re not the caster of the spell… you’re the target. From singing sirens of the sea to faerie enchantresses, the storybooks are full of mortals being lured by lust, love, and magic. A love spell is cast… you show us what happens next.

I wanted my story to feel soft--my love spell would come as a gentle epiphany, revealing feelings already present but buried beneath the surface. Violets quickly became my guide.

According to Diane Ackerman's A Natural History of the Senses:


Violets contain ionone, which short-circuits our sense of smell. The flower continues to exude its fragrance, but we lose the ability to smell it. Wait a minute or two, and its smell will blare again. Then it will fade again, and so on. How like [Napoleon's] Josephine, a woman of full-bodied if occasionally recondite sensuality, to choose as her trademark a scent that assaults the nose with a dam-burst of odor one second, and the next leaves the nose virginal, only to rampage yet again. No scent is more flirtatious. Appearing, disappearing, appearing, disappearing, it plays hide and seek with our senses, and there's no way to get too much of it.

The image of the violet's elusive scent stuck with me. When I found that violets traditionally have a connection to the Virgin Mary, I had my story. The connection provided a tradition in which the magic could take place.

I'm excited to see the entire book, and I'll post more about "Violets"--including an excerpt--when it's closer to the anthology's release date.
Posted by Annabeth Leong at 8:00 AM