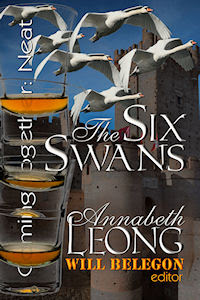 My novella, The Six Swans, came out this weekend from Coming Together. Here's a description of the book:

The young King Evan struggles to become a man and ruler amid the choking influence of his mother’s spies and machinations. When he meets a silent, beautiful woman in the woods, he can’t resist the pure, honest sensuality of her touch. Bringing her to the castle as his wife and queen is Evan’s declaration of independence. The king’s hard-won happiness falls apart, however, when his mother accuses his new wife of murdering their first-born child. Evan believes that the private, physical language he shares with his queen tells him everything he needs to know, but as tragedy strikes again and again, his love and faith are tested to the breaking point.

"The Six Swans" retells an old fairy tale of a princess who must take a vow of silence to save her brothers from a curse, the king who falls in love with her despite the seeming insanity of the curse conditions, and the sexual connection that’s strong enough to overcome the isolating power of the princess’ vow.

I've written a lot about this publisher. The tagline is "Doing Good While Being Bad." All proceeds from sales of The Six Swans go to Kiva, an organization that gives microloans. The book is on sale for $1.99 from online retailers including 1PlaceForRomance, Smashwords, and Amazon.
Posted by Annabeth Leong at 8:00 AM