Out Today: Not the Leader of the Pack 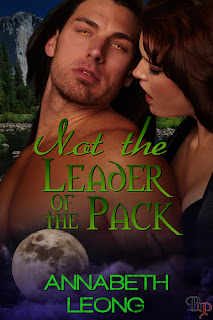 I'm so excited to share my new paranormal erotic romance with you — Not the Leader of the Pack. I'm proud of this book — it's hot, it's set in a world that fascinates me, and writing it helped me get through a rough time. I'll be doing a blog tour at the end of June, so there will be plenty of chances for me to talk more about all the things that went into putting this book together. In the meantime, here's some information (be sure to scroll down to the end to see my buy one, get one free offer).

Rival alphas Juli Gunby and Neil Statham want to tear each other apart — but will they do it in battle or as mates?

When Juli Gunby left Missoula, Montana, she didn’t intend to come back. Not to her exacting alpha werewolf father, and certainly not to Neil Statham, the beta who rejected Juli’s girlish advances. Her father, as usual, has other ideas, using his dying breath to pass pack leadership to his daughter. Juli resolves to carry out her duty to her father and her pack, but the one man she wants on her side has made himself her enemy.

After years of loyal service to the pack, Neil expects to take over as alpha when his mentor dies. As good as it is to see Juli again, he knows he can’t trust her. After all, she abandoned both him and the pack years ago and never looked back. Neil determines to fight for his rightful position in the pack, even if that means going up against a woman who fills him with an overwhelming urge to mate every time she walks into the room.

Someone needs to lead, and the more Neil and Juli fight, the more they attract interference from those who would control the pack and destroy the ties between them.

"Juli. We're the only pack members who saw your father pass that ring of leadership to you." He paused to allow the significance to sink in, the bar noise around them rising to fill his silence. "You have another life in Lewistown. You have a career. You've made it clear you're not interested in this pack. We can say whatever we want about what took place in that room. He could have passed the ring to me as far as anyone else knows. No one would question that."

He would have kept talking, except that Juli wrenched herself violently out of his grasp at that point. "Not interested in this pack? We can say whatever we want?" He heard her just fine over the music despite the new distance between them. In fact, he worried who else had heard her mention the pack. And who else had seen that furry paw she'd thrust into his face.

They both froze for a second, staring at her latest lapse of control.

"Damn it." Juli's curse came out more as a growl than as words.

"We need to get out of here," Neil said. "You just focus on staying cool." She knew better than to argue with him. He grabbed her hand and pulled her out, leaving their beers behind. They could finish this conversation in his truck.

They ran for the truck like the rest of the world was on fire, and slammed the doors behind them once they got there. Juli writhed in her seat, gasping, her wolf form rippling just on the other side of her skin. Neil panted in response. He didn't normally have trouble controlling his shift, but with her beside him, so close, too much of him wanted to meet her in a place of complete abandon. He wanted to run with her under the moon, fight her for supremacy until neither cared who wound up on top or on the bottom. Then, with one last vicious pounce, he wanted to surrender to the merging of their bodies. He swallowed hard.

Stats. He ran through the winning World Series teams for the last three decades. He tried to calculate his total career RBIs. The stream of data calmed Neil down. He started the car. "I'm going to drive us somewhere a little more private," he told Juli. "Just in case."

"Back to the hospital."

"Back to the hospital." She showed fangs. Neil didn't need that so soon after he'd regained his own control. He stopped arguing and pressed the gas. They'd go somewhere. He just needed to be driving so he had something to concentrate on besides the idea of Juli giving herself up to the beast. He needed a really good reason to remain in human form.

The truck's cab filled with her labored breathing. Neil turned on the radio to distract himself from the sexual images the sound called up for him. He'd always avoided being alone with her, afraid to give even the appearance of impropriety. Right then, Neil wasn't sure if he was grateful for the trouble he'd saved himself or sorry as hell for what he'd missed. The instinctual attraction he felt for her was off the charts.

He got so caught in his reverie that only Juli tugging at his sleeve alerted him that her struggles had become sobs. "Neil, can you pull over?" Her voice sounded deflated. "I'm sorry I insisted about the hospital. I'm not ready to go back there yet."

Her obvious misery immediately pierced his sexual fog. Neil pulled the truck into a convenience store parking lot and looked at her. "Do you want a minute? I can go get some water."

"No, it's okay." She hesitated, chewing on her top lip. "I'm obviously way out of control."

He watched her face carefully. "About what I said in the bar... I didn't mean to offend you."

"You just think I don't care about any of this."

Her head snapped up and a bit of the wolf flickered behind her eyes again. "How can you ask me that?"

Neil blew out a long breath. She wanted him to make his case? He could do that. "You know being pack alpha doesn't pay. What about your fancy job in Lewistown? The one that was so important you couldn't come back here to visit your dad?"

She rubbed her eyes. "Can you try to keep the venom out of this, Neil? Jeez, you're so bitter, you'd think I failed to visit you." Bingo. But Juli continued speaking, oblivious. "Gabriel's not going to like it if I resign. He talked a lot about developing new talent when he hired me. But it's not like the Council can't run without me. This was my father's last request. Besides, the pack probably needs me more."

He swallowed, unable to believe she had the nerve to say these things. "Maybe I'm underestimating how good you are at walking away from things. Foolish of me, since I have personal experience." Neil shook his head, uncertain if the anger surging through him was directed at himself or at Juli. "The pack needs someone really committed, Juli. Not someone who will leave again the next time it's convenient."

She snapped her gaze to his, her eyes widening with understanding. A wave of fear rushed through him. He'd revealed too much of his personal feelings. They needed to decide about the pack first. "You were the one who rejected me, Neil," Juli said, her voice so soft he almost couldn't hear her. "All I did was move on."

Annabeth Leong has written romance and erotica of many flavors -- dark, kinky, vanilla, straight, lesbian, bi, and menage. Her titles for Breathless Press include Not His Territory, Not the Leader of the Pack, and a contribution to the Ravaged anthology. She enjoys writing about the tension between passion and control that werewolves embody. Unfortunately, when Annabeth loses control of herself, she does not gain the power to change shape. She lives in Providence, Rhode Island, blogs at annabethleong.blogspot.com, and tweets @AnnabethLeong. She loves talking books on Goodreads, too: https://www.goodreads.com/author/show/5295946.Annabeth_Leong

Buy One, Get One Free Offer: 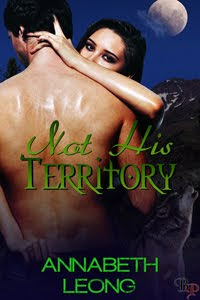 Not the Leader of the Pack stands alone, but I've written in its world before. I’d love to share the previous title, Not His Territory, with current readers. If you’d like to participate, e-mail proof of purchase of Not the Leader of the Pack, such as an Amazon receipt, to annabeth dot leong at gmail dot com and let me know your e-book format of choice. I will buy a copy of Not His Territory for the first 25 people who respond.

Posted by Annabeth Leong at 6:24 AM