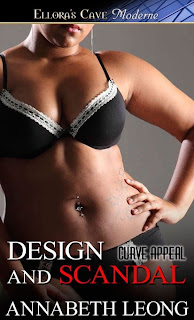 My next book from Ellora's Cave, Design and Scandal, has a release date! It will be out Sept. 18, as part of Ellora's Cave's theme series Curve Appeal (which features Rubenesque heroines).

Costume designer Kahala Lin didn’t get into her line of work to make clothes for tiny models. She dreams of creating high-fashion masterpieces for BBWs such as herself. When she’s hired to work on costumes for the science fiction movie Laser Sentinel, she passes up the opportunity to dress the film’s heroine and ends up with the hardest job on set—pleasing the demanding and devastatingly handsome star, James Corwin.

James is one of Hollywood’s best known actors, but he’s in trouble when he’s forced into working on this dud of a movie. James can’t relax and enjoy the shoot on Hawaii’s black sand beaches. He needs to prevent this film from becoming an embarrassment, starting with making sure he’s not shot wearing nothing but spandex, a headdress and a ray gun. His collaboration with the new costume designer starts out promising, but soon he’s so busy taking off her clothes that he’s hardly thinking about what he’ll wear at all.

The press, however, discovers their relationship almost before it begins, and the resulting scandal threatens both their livelihoods and James’ chances with Kahala.

You can check out this and my other Ellora's Cave titles here.
Posted by Annabeth Leong at 8:00 AM