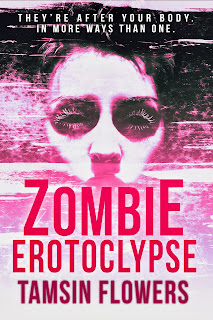 The zombie apocalypse has been done many times, but how about the zombie erotoclypse? Today, I'm excited to welcome Tamsin Flowers to the blog. She'll be telling us all about the sexy side of zombies.

The first zombie story I ever wrote was The Joy of Zombie Sex, which appears in my new collection Zombie Erotoclypse—and I think you can probably guess from the title it was also the first sexy zombie story I wrote. It's about Alice, a freshly minted zombie who has no idea she's just joined the walking dead. Luckily for her, a more experienced zombie recognizes her for what she is and sets about showing her the ropes—eating brains and experiencing mind-blowing zombie sex!

Zombies are sometimes played for humor, sometimes for high tragedy, and sometimes for both. Do you prefer one of these approaches? Which shows up the most commonly in your work?

Generally I've tried to keep all the stories in the collection fairly light-hearted. One or two of them are romantic and the final story, Bar the Door, is a bit of a tear-jerker. I wouldn't say I prefer one approach over the other—my main aim with this book was to write them sexy.

Well, I'm certainly not the first to have come up with the concept of zombies being sexual beings - there's already quite a canon of zombie erotica out there. However, there are a couple of reasons why I wanted to explore it in my stories. Firstly, it stands to reason that if the zombies retained one human appetite—hunger—they'd retain others and, as an erotica writer, naturally their sexual urges were of most interest to me. Secondly, it's rare for zombies to be portrayed with an internal life—most zombie fiction is about how the surviving humans deal with the zombie apocalypse. But hold on—zombies were once human too, and it crossed my mind that there must be at least a vestige of the original person left inside them—with all that individual's urges and desires. If their hunger is magnified to a murderous level, then what happens to their sex drive?

Are your zombies lovers fast or slow?

I'd say they're fast—born out of desperation! The sensations and the emotions these zombies feel are intensified but so are all the difficulties in finding someone to have sex with. In I Was a Teenage Zombie Virgin, the hero John not only has to deal with all the usual problems a teenager has, but being a zombie makes everything a hundred times more difficult. When these zombies find what they're looking for, get the chance to get down and dirty—they really go for it!

I often think of the modern age as the era of the zombie. The popularity of the walking dead seems to have gone up, even as I sense waning interest in vampires and the common monsters of the past. Do you agree? Why or why not?

I totally agree—zombies are hot right now, in the cinema, on television, in books…you'll find them wherever you look. People are even having zombie-themed parties and going to zombie events. October 13 sees the return of everybody's favorite zombie show and I, for one, can't wait.
The zombie seems to have become a metaphor for our times, in more ways than one—are the brain dead zombie hoards representative of a politically apathetic generation, a generation so wired into social media that they walk around in real life like zombies, or are they feeding on our fears of becoming zombies in old age? Or maybe you see them as indicative of fears of some future disease that our unmanageable populations will become susceptible to like mad cows' disease or bird flu but worse…? It's a classic fictional manifestation of our fear of the unknown—and by turning them into something that we can chop down with a machete, we're trying to put those fears to rest.
Who knew that an interview about zombie erotica could get so deep?

Anything else you want people to know about your collection?

The all important facts:
Zombie Erotoclypse is available at the bargain price of 99c or 77p from:

Could I get a hot excerpt, please?

Of course! This is a snippet from the first story in the collection, Red Hot Zombie Cock.

Marsha has enough to contend with - a whole city full of zombies at the end of the pier where she's taken refuge - without having to put up with the antics of her cousin Skylar. So when he persuades her to visit a zombie sex club to celebrate her birthday, she knows from the get go it's a bad idea.

Mack steps forward and from where we're standing, slightly to one side, I can see that he's rubbing against the groin of his jeans with one hand. I can hardly believe what I'm watching and I almost forget to breath. After a couple of thrusts against his hand, the boy unzips his pants and wrestles his cock out through the slit, tangling with it until it's standing proud outside the denim. He makes a half turn to let the crowd see his impressive erection, a wide grin on his face.

"Jesus," I say and Skylar puts an arm round my waist. I'm not sure I want to see this.

The kid turns back to the cross and puts a hand out to touch the zombie. He brushes it, quite softly it looks, across her breasts, making the zombie grunt and strain against her restraints. The grin has gone from his face and he looks completely fascinated. He runs his fingers down her torso, slowly, exploring the texture of her rough, grey skin. Under his touch, she bucks and the grunt becomes a moan that steadily increases in volume the further down he ventures. On the next cross, the male zombie seems to sense what's happening and starts baying as he, too, struggles to get free.

"Apparently zombies have an epic sex drive," whispers Skylar in my ear and I feel his hot breath on my neck.

Mack spits on his index and middle finger and pushes them down between the zombie's splayed legs. It has an instantaneous effect, as if a jolt of electricity has been passed through her body. Her back arches and her head whips from side to side as she releases full-blooded zombie scream. In the enclosed space, it tears the air and reverberates in ears and chests. Mack looks back over the shoulder at the baying audience, his grin back in place. Then he takes his cock in one hand and uses his other hand to find a pathway into the zombie's pussy. He strokes his swollen head up and down between her lips and then I see his hips surge forward as he pushes himself inside. She screams again and the male zombie roars with her. When I look at him, I realize his cock's even larger now and he's pulling harder against the bindings at his wrists and ankles.

The crowd goes wild with catcalls and whistles as Mack pumps in and out of her. And despite my revulsion for what I'm seeing, I realize that between my legs I'm wet. Skylar pulls me back against his body and I can hear that his breathing has quickened. He grinds his hips against my ass and I feel the bulge of a nascent erection.

Tamsin Flowers loves to write light-hearted erotica, often with a twist in the tail/tale and a sense of fun.  In the words of one reviewer, 'Ms Flowers has a way of describing sexual tension that forces itself upon your own body.' Her stories have appeared in a wide variety of anthologies and she is now graduating to novellas with the intention to pen her magnum opus in the very near future.  In the meantime, like most erotica writers, she finds herself working on at least ten stories at once: while she figures out whose leg belongs in which story, you can find out more about her at Tamsin's Superotica or Tamsin Flowers. Follow her on Twitter @TamsinFlowers or on Facebook Tamsin Flowers.
Posted by Annabeth Leong at 2:12 AM