The Pain-Studded Absolution of Those Boys 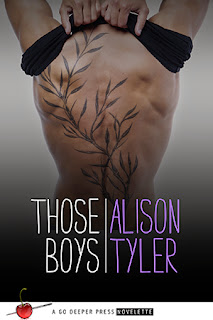 Readers of the previous novelette, "Those Girls," will welcome the return of Sandy, the cocky but not too perfect bisexual dom who starred in that outing. We've also been treated to the return of Vanessa, the titular girl.

The new addition is Rem, a silver-haired, tattooed, Western-shirt wearing rocker who Sandy sums up this by telling us what kind of boy he is. Rem, Sandy says, is one of "those 'I need your approval of my outfit, and it will take me six hours to choose a shirt' boys."

What ensues when these three collide is a tale of desire. Sandy wants Rem, Rem wants what Sandy can give him, and Vanessa wants to enjoy them both. With everyone wanting so much, the reader might ask what holds them back from satisfaction—but where sex comes into play, the answer is all too clear. What holds many of us back from satisfaction is ourselves, and that's no less true for the conflicted Rem.

The emotion between Sandy and Rem is intense, and the sex scorching, but I especially love that Tyler doesn't neglect Vanessa. Her relationship with Sandy remains nuanced, and is advanced by the story, and there is palpable chemistry between her and Rem.

As she's discussed on her blog, Those Boys is different in a very important way—she's writing from the perspective of a male dom rather than the semi-autobiographical female "I" that's common to much of her other work (such as Dark Secret Love). That girl is still present in Those Boys (Vanessa, like many Alison Tyler narrators, has a preference for diaphanous dresses and a love of anal play), but it's fun to see her from a different perspective. And it's exciting to read the flip side of Tyler's kinky world. Sandy delivers the sure sexiness of a dom without becoming so certain of himself that he turns into a caricature (I feel as if I said something very similar when reviewing Those Girls, but it's true in both novelettes). His desires are front and center, and they're interestingly distinct from those of his subs.

"I know that a real, true sub requires more than pain. There's the understanding that accompanies the desires, absolution above all else."

I might appropriate that sentence to describe what I need as a reader. I want the pain and the sex, but I also need the panoramic view of kink that I've gotten from this series. I need to travel into Sandy's mind because I need that absolution, too. Tyler has said that she's at work on a prequel called Those Days, where we'll be introduced to Sandy's origins.

(Disclaimer: I received an ARC of Those Boys in exchange for an honest review. I have also written for Go Deeper Press and Alison Tyler. I've also spent untold sums of my own money buying books from both sources...)
Posted by Annabeth Leong at 12:30 AM