I spent last weekend at the Circlet Press Editorial Retreat, also known as #porncamp. I like the name because it embraces the sexuality we're trying to celebrate. At the same time, I don't think it accurately represents how deep things get there. I have a master's degree in writing, and I've been to all sorts of conferences and classes, and I've never been to any event or class with as high a degree of really useful information and activities as #porncamp. Here are some impressions of the whirlwind: 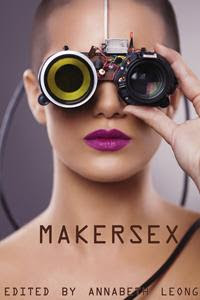 We recorded a podcast of a live reading with Nobilis Erotica (you can hear me last, reading from my genderqueer science fiction story "Always the Same, Always Changed", which you can hear in full in The Sexy Librarian's Dirty 30).

Laura Antoniou, writer of the Marketplace series clued us in on tips for writing and sustaining a series. I've always wanted to try writing one, so I was glad to learn from a master. Cecilia Tan also shared insights about serials, which is another form I've been curious about, and that wasn't covered in my formal writing education.

Social media is hard for me. I genuinely like talking to people, but maintaining that day after day online takes a sort of energy and attention that I often feel I can't afford—too often, it seems it would come at the expense of my writing or my significant personal relationships. So much talking about social media in writerly contexts is about shame and endless to-do lists. I really appreciate that at the Circlet Retreats we've talked about it with more attention to pragmatism, personality, authenticity, and emotional needs. Last year, we talked a lot about depression and social media. This year, Avery Vanderlyle came up with some great ideas for how writers can support each other while being social. I'm really looking forward to working with her and Artemis Savory on allowing a bit more of myself to live online. Also, Artemis and Avery are wonderful. This post wouldn't exist without them, so it's already working!

I moderated a panel on safer sex in speculative fiction worlds. I've said for a while that I prefer contemporary erotica stories to include safer sex because there's a lot of characterization that one sees in how those discussions, negotiations, and practices are handled. There is an ease to handwaving those issues away in speculative fiction, but I think that leaves a fair bit of world-building on the table, and denies a chance to get to know more about who's in the story. This could be a giant post in its own right, but I framed some categories for us to talk about, and then enjoyed what Circlet authors and editors had to say about them.

In no particular order, I think consider safer sex in specfic could produce really interesting details about barrier types (psychic as well as physical? something else?), negotiation techniques (verbal/nonverbal? ritual? etc), cultural beliefs (matching science or not? consistent across cultures?), consequences (complex, definitely), and opportunities for display of trust and intimacy. These are all really cool things to think about when designing other worlds. I want to spend more time sinking into these ideas, either in story or post form.

I finally, finally got to play Slash: The Game, which I've heard about every year at #porncamp. I'm still thinking about Barbarella paired with Morticia Addams, and Mr. Spock finding love with Castiel.

And last but not least, Circlet's publisher Cecilia Tan never lets us get away without writing something new, so I have the beginnings of a lesbian robot story that I'm going to be finishing up in the next few days. Here's a taste:

"Fuck them," I said, as I began to fuck her. "It's not our fault they fucked up the programming. I don't give a fuck if they die because we're off mission."

So that starts my afternoon off right. Having participated in the group activities, it's just about time for me to head back to my bunk ;)
Posted by Annabeth Leong at 12:44 PM