Guest Post: Celebrity in a Time of Geeks by Avery Vanderlyle

There's a new book out today from Dreamspinner Press called Starstruck, full of m/m stories about (fictional) celebrities. I noticed that my friend Avery Vanderlyle has a story in the book ("The Ruby"), and I thought it would be interesting to have her post about some of the philosophy behind her story. In the Internet era, "celebrity" is one of the most relevant and fascinating things to consider. With no further ado, I'll turn this over to Avery.

Celebrity in a Time of Geeks
by Avery Vanderlyle 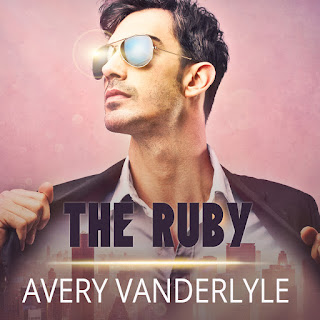 My first crush was Chekov on the original series of Star Trek (played by Walter Koenig). So you see, I'm a geek from way back. Full disclosure: this was while watching re-runs of the show with my parents in the 70's, so not as far back as you might be thinking. But the point stands.

So when I heard about the theme for the Starstruck anthology, I thought about celebrity through a geeky lens. I've grown up through the era when "nerds" were ridiculed and looked down upon to a time when some of them were lauded as the pioneers of the computer and internet era. These are celebrities who are intellectual, creative, sometimes awkward. Many are not that good-looking.

The dark side of promoting these geeky celebrities is they are almost all men, almost all white, almost all straight. Lauding them, establishing a certain geeky "type" in popular culture, has contributed to the feeling among women and people of color that they don't belong in that world. (GLBTQ people have always been there, though it wasn't always safe to come out.) I hope our ideals of what geeks look like is changing and will expand to allow more people to identify with them.

Part of the internet era has been the rise of video games as a force in the entertainment industry and in the popular culture. My time is too limited to play, but I try to keep up with the trends. Everyone earlier this year was discussing the new virtual reality systems coming out. Would v.r. stop being a niche toy and break out into popular consciousness? What would that look like?

My story began to take shape. The person who creates the first break-out virtual reality program will become another of the pantheon of geek celebrities. Okay, he'll be the celebrity half of my protagonists. What kind of program will it be? How about a fantasy version of the wild west, a variation on a mythos that many people are already familiar with? Parts of the story can take place in this virtual world; there can be adventures. Quests. The hero has to win a gem to meet his idol, the game creator. And "The Ruby" was born.

It ended up being a sweet, fun story about two geeks who share a love of the internet age. Erza has to fulfill his quests to connect with Toby; Toby has to be open to the interest of a fan. "Virtual reality" is just one more mechanism for us to connect with others and fulfill our dreams.

This is the publisher's description of Starstruck:

To the average person, celebrities seem to have it all—money, fame, and droves of adoring fans lining up to fawn over them. But a life in the public eye can make romance challenging, and deep down, these guys are looking for the same thing as any other man: someone to share a steamy tryst with between acts or to ride off into the sunset with after the curtain has gone down. Luckily there are those willing to love the men behind the billboards and on-air personalities, and they’re looking for a private performance from their favorite drag queens, musicians, reality TV stars, actors, rodeo champions, and video game designers. Even superheroes and legendary defenders. Money and fame might not always equal happiness, but these celebrities will leave stars in their lovers’ eyes.

Marked by the Queen—George Loveland

The Defender of Ruldan—Jessica Payseur

You can find more information here.

Posted by Annabeth Leong at 8:11 AM