I've Got Your Ticket to Ride 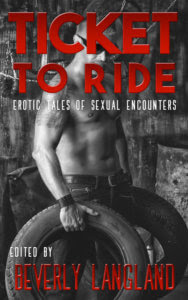 Did you want an excerpt of my story? I got you.

My thoughts raced as I listened to Cindy instruct the cab driver. What did she expect me to do? Would it be OK for me to just lean over and start kissing her?

My libido had plenty of ideas, but I was used to reining that in. Feeling awkward, I worked a hand along the back of the seat until I had an arm wrapped around her shoulders. Still quivering with nerves and anticipation, I dipped my head toward hers until I felt her hair against my cheek. She smelled so clean, so perfect—all those salon and spa scents that had never seemed to stick to me the way they did to other girls. I let my lips brush the top of her ear. “You good with this?”

She hummed way back in her throat and nodded. My body pulsed again, but my thoughts still had me panicked. I realized I didn’t know how she liked to be touched, didn’t know anything about her except the details that could be gleaned among a large group in a noisy bar.

I still wasn’t sure what she wanted with me, but being bold was working so I tried to keep it up. Grabbing hold of one of the fantasies I’d been having about her, I trailed my lips down to her earlobe, then to her jaw, then to the point of her chin. Slowly, a bit shocked at my own daring, I traveled up to her mouth, pausing just before initiating a kiss.

She smiled and took my hand, guiding it to the top of her thigh. She was wearing a short skirt, and I took the hint and slipped my fingertips under its hem. A bolder person might have reached toward her panties right away, but I was still having trouble believing this was happening.

“Sadly, there’s not much traffic,” she whispered, then laughed. “First time I’ve said that sentence. The point is, we probably won’t have more than a half hour before we get to the airport.” Her muscle twitched beneath my fingers as she spread her legs slightly.

Want to know more about the book?

Entice yourself with stories of:

Trains: The constant rhythm and clatter of wheels on rails, the side-to-side motion and a sense of entrapment between stations adds a touch of spice to a new encounter; and stealing pleasure on a crowded platform just heightens the excitement. Or travel back to the splendour of the steam age to follow a detective and the thief she’s set out to capture.

Planes: The confined space of the seats necessitates unconventional solutions to comforting a fidgeting woman, particularly when things aren’t quite as they seem.

Want to buy it right now? You can do that here.

Thanks for reading! <3
Posted by Annabeth Leong at 3:10 PM