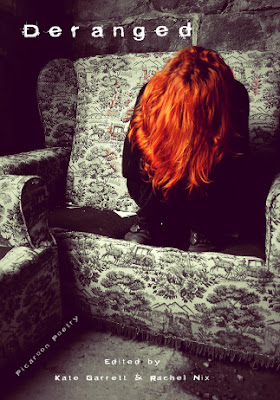 Please allow me to introduce my newest release. My poem, "Lead," appears in Deranged, a new collection from Picaroon Press, edited by Kate Garrett and Rachel Nix.

"Lead" is a poem about the disorientation I experienced the first time I stepped outside the bounds of a heteronormative relationship. It wasn't until then that I'd realized there was a whole code of behavior I'd internalized. When I dated a woman for the first time, I felt the absence of that code constantly. I felt like we were inventing everything anew, and that was both thrilling and disconcerting.

I'm really excited to read the other poems in the book!

Deranged was originally a response to the claim by one critic that women writers calling out sexism were ‘deranged poetesses’. It grew into something much more than that.

For now, the book is only available through Lulu, but it will propagate to Amazon soon. If you'd like to check its current status, its main page is here.
Posted by Annabeth Leong at 8:00 AM