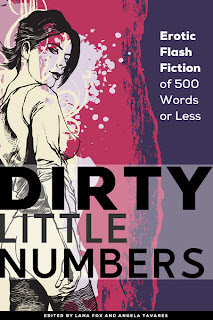 Just yesterday, I was talking with a friend about the periodic waves of corporate censorship that erotica writers face. My friend commented that comedians facing censorship have the magic word "satire" on their side—-and wondered if erotica writers have any similar get-out-of-jail-free card.

I want to make a stronger statement, though. How about the times when I'm just so turned on by the words on the page or screen that I can't help myself? The times when I don't even care about literary merit, I just have to come? I'll never forget the raging arousal I felt after reading Giselle Renarde's Wedding Heat: Two in the Bush. Jaded me, who these days often finds descriptions of explicit sex repetitive, had to close my laptop and run to the bedroom to bring myself off as quickly as possible, noisily, desperately, as if I'd just discovered masturbation. There is art in that, pure art. Not every sex scene does that to me. There is art in finding and portraying the real heat of a moment.

I agree with Lana and Angela that honoring that art is a sex-positive and profoundly radical act. Their quote above is from the introduction to Dirty Little Numbers, the newest release from the fantastic Go Deeper Press. I've got a story in it, and I couldn't be happier to be part of this.

That's so important, and you'd damn well better believe that it's art.
Posted by Annabeth Leong at 7:05 PM