It's Not Too Early to Be Filled With Christmas Spirit 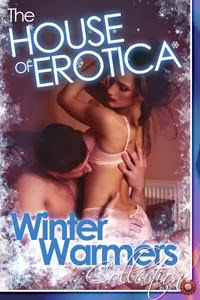 You know I mean that in a kinky way, right? Of course you do!

My story is called "Filled With Christmas Spirit," and I'm sure you'll be surprised to learn that I'm actually talking about going caroling while wearing a butt plug. Because how else would you do it?

"Good girl," Marcus said. "Can you guess what the fourth thing I wanted was?" He brought his hand to her side, stroking her with the firm affection he might have used with an expensive racehorse.

She shook her head.

"Uh, sheet music? If we're going caroling, that is."

Marcus burst out laughing. "That wasn't what I had in mind, but you get points for that answer." He released her and went to rummage in the dresser. "I need lube to get your ass ready for this plug."

"Marcus, you can't really mean to take me out of the house with that in me!"

Caroline whimpered, already imagining herself surrounded by fresh-faced, wholesome-looking carolers, trying to conceal the secret fullness in her ass.

"If I'd known this idea would excite you so much, I would have tried it sooner."

Caroline frowned, then realized her whimper had become a moan before it ended.

The bed creaked as Marcus settled himself behind her. A moment later, he spread her labia. The sudden intimate touch underscored the submission she had chosen to give him. He hadn't needed to kiss her first, or to slowly work his way up to touching her there. Instead, he took it as his right to touch her there.

His finger slipped into her. "You're soaking, Caroline."

Marcus found her favorite inner spots and pressed against them, leaving Caroline unable to answer him with words. She braced herself on her palms as well as she could, resisting the urge to drop flat onto the bed as he slid more fingers inside her. Every time she swallowed, she felt the ribbon against her throat and remembered that she'd given herself over to Marcus's plans for the evening.

"We shouldn't lose our Christmas spirit," Marcus said in the same teasing tone he'd been using since he got home. "I think you should practice your caroling now, Caroline." He lingered on the similarity of the activity and her name, pronouncing the repeated sounds with relish. She might have commented on this if she'd been able to speak. Instead, she shook her head rapidly and continued to moan.

"Oh, come on. I know you like Christmas. Let's give it a shot together, shall we?" He cleared his throat theatrically while suddenly giving his fingers a twist inside her. Caroline cried out in surprise at the same moment that Marcus sang in a rich baritone, "God rest ye merry, gentlemen, let nothing you dismay."

You can pick up the anthology at All Romance, Amazon US, Amazon UK, and other good e-book retailers.
Posted by Annabeth Leong at 8:00 AM