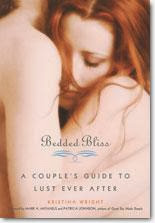 The ground Bedded Bliss covers makes for an interesting read—and attests to the ground that a married couple can cover over the course of a long sex life. Wright pulls off a difficult balancing act: she brings up many, many possible directions for married couples to go while at the same time affirming the value of too-often-maligned vanilla sex. The book is gentle but exciting, far-reaching and open-minded without making the reader feel as if spicing up the sex life requires a fat bank account and the flexibility of a member of Cirque du Soleil.

It's a very intimate book, and this is the thing I liked best about it. Wright and her contributors all open up about their own sex lives, and that makes the erotic fiction she includes feel all the more intimate in turn. Many contributors have more than one story in the collection, and I liked the effect—it made me feel as if I knew them better to see them presenting couples from several angles. In many cases, the stories seem more autobiographical than fictional. The writers often use first-person POV, along with the names of their actual spouses. In other cases, they use consistent characters over several stories, such as Jeremy Edwards' Mel and Lawrence or Heidi Champa's Duncan and Lena.

I also appreciated the inclusion of male writers in this book—they didn't make up fifty percent, but there were a higher proportion of them than in many collections of erotica that I've read. Considering the goals and subject matter of this book, I think it's important to have that perspective.

This phenomenon was made more problematic because I read the Kindle edition of this book. The navigation and table of contents in the electronic version left much to be desired, and I often wished for the physical book instead. It would have helped me to be able to flip back and forth easily. This is the sort of book that made me want to make connections—to read stories in a different order than the one they're presented in, to skip around, to scan and explore. It particularly annoyed me that the Kindle Edition's table of contents did not list the erotic fiction titles and authors.

I have mixed feelings about how Bedded Bliss handled the reality of non-heterosexual married couples. There was one story by Evan Mora, a woman in a long-term lesbian relationship. I was glad to see it, but it was included in that random chapter at the end, so I'm not sure most non-heterosexual readers would get far enough to know it's there. The book could be read by a non-heterosexual couple, I suppose, but until I reached Mora's story, it had screamed heterosexual to me. Considering the inclusion of Mora's story, I wished there had been a paragraph or two in the introduction that made a point of welcoming LGBTQ readers to the table, and (in for a penny, in for a pound) a greater commitment to telling the stories of married couples outside the heteronormative spectrum. As it was, Mora's story struck me as too little, too late.

Another interesting but mixed feature of Bedded Bliss is that it's pretty clear it's aimed at couples who are currently happy or at least have a very strong foundation. For a reader who feels generally positive toward his or her spouse, the language of the book will likely feel affirming and encouraging. For a reader who's having deeper problems, this same language may be incredibly off-putting.

For example, Wright says, "If the idea of sharing your deepest, darkest sexual fantasies with your spouse sends you running into the closet, consider this: you got married because, in addition to being the love of your life and sexy as hell, this is the person you trust most in the world. Right?"

I've been married twice, so I read that passage with two sets of eyes. The current me can answer yes to that question (I am happily married this time, so far). In my previous marriage, however, that question would have filled me with helpless frustration.

I think it's good for a book like this to exist, one that tries to help marriages long before they're broken, or to help people build on something that's already good. Bedded Bliss does acknowledge in places, however, that there are limits to this approach and some relationships may not work out.

In the end, I think Bedded Bliss may not have matched the heights of its ambition, but the result is still a book that will be very sexy and valuable to many people. This book fills an important niche that's rarely served (the only similar book I can think of is Alison Tyler's Never Have the Same Sex Twice). Wright and her contributors are wise about marriage, encouraging and realistic, rich with experience to share. They offer some necessary pushback against media-driven images of who gets to have good sex and what good sex is. They demonstrate how each couple must define for themselves what it means to have a sexually satisfying relationship. That's important, and I'm glad to have read this book.

Bedded Bliss is available here, and in many places online and in physical stores.

Disclosures: This post is part of the official blog tour for Bedded Bliss. I write for Cleis Press, and have been edited by Kristina Wright. However, I purchased my own copy of Bedded Bliss, and the opinions I've expressed are my own.
Posted by Annabeth Leong at 12:30 AM