I've been collecting a bunch of things that I want to mention, so I'm going to gather them together into one news post. 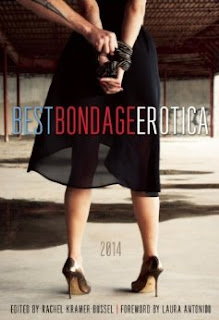 It's out, and it's got my story "Eel" in it. I haven't gotten my contributor copies yet, but I'm looking forward to reading this, and am sure it's hot as always (and early reviews indicate it is). Editor Rachel Kramer Bussel has been collecting mini-interviews from the contributors, and you can find them here. I talked about the inspiration behind "Eel" here. And, because this came up on Twitter, we're not talking about eels as in the creatures here—the story is about a woman who likes to escape from ties, much to the consternation of her various tops. 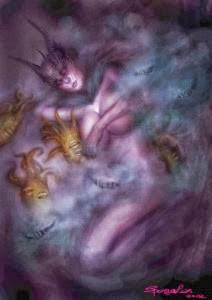 Do I have to tell you how much I love it when I get a chance to dirty up the Mythos? My story, "Our Child," is slated for inclusion in this forthcoming book from Martian Migraine Press, edited by Justine Geoffrey and S R Jones, and oh my elder gods I had fun writing it. It's got the distinction of being my first Lovecraftian milking fetish erotica (because Shub-Niggurath is a fertility goddess, you know). And that's not all it's got. If I do say so myself, it also has a serious literary point.

As a side note, I attended a conference last year on Lovecraft and all things Lovecraftian, and I have to say I was very disappointed by the negative attitude toward erotica that I picked up from the panels there. Even if Lovecraft himself would have blushed with horror to know what I like to do to the Mythos, I think it's always been ripe for the ministrations of people in my field. I found it a bit rich to see writers of weird, pulpy horror prepared to dismiss another genre as schlock. My dears, we writers of weird, pulpy things should stick together, all innuendo intended.

I was so annoyed by the negative bias that when I got home I threatened half-seriously to go ahead and write "Booty Calls of Cthulhu" just to show you what pulp can be. Unfortunately, something very close to that title already exists on Amazon, so I'll have to come up with a different clever revenge.

When The Conqueror Womb comes out (I believe around Valentine's Day), let us all go out and buy many copies of it. I like to celebrate my weird erotica.

My kinky suspense novel, The Fugitive's Sexy Brother, came out in paperback at the end of December! You can get it at Amazon as well.

Emily Boysen is sick of low-level bounty hunting jobs that don’t pay her rent, and sick to death of her ex-boyfriend taking credit for her work. Ready to claim her due, she takes on the quarry of a lifetime, the notorious Fernando Bonavita. But instead of the fugitive, she captures his sexy younger brother, Javier.

Javier Bonavita never wanted to know the truth about his older brother’s activities, instead protecting him out of loyalty. When he uses his hacking skills to pose as Fernando, he never expects to uncover crimes he can’t stomach. Beautiful Emily has no idea how glad he is to be in her custody—as long as he’s her prisoner, he doesn’t have to face his brother.

Passion flares between Emily and Javier, and soon he’s putting the handcuffs on her. Suspicion grows along with their feelings, though. A sinister plot centers around Fernando, and untangling it will test their loyalties to the limit.

Oh Get a Grip!

Hey, did you notice that 2014 started? Many people posted their 2013 word counts, goals, and such. I'll be honest—I planned to do the same. But as the days have slipped by, it's occurred to me that I'm happy I didn't. One of the main things I'd like to do this year is slow my obsession with counting. I have effectively tortured myself that way for many years. I would like to free myself of the tyranny of deciding whether not I'm a good person based on whether or not I crossed an arbitrarily selected threshold of words produced. So, let's leave my count for 2013 a mystery, shall we? I worked hard and wrote tons, and I plan to do the same this year.

That's all for now, though I hope I will have much more news to share in the coming weeks and months!
Posted by Annabeth Leong at 8:00 AM