I Submit to the Big Book of Submission 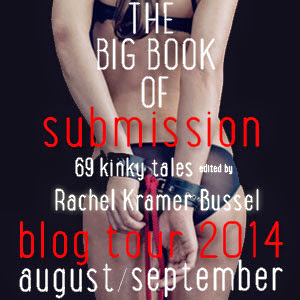 I've got a story in Rachel Kramer Bussel's latest anthology, The Big Book of Submission, but I've already posted an excerpt and a description of my inspiration for it. Now that the blog tour's come around, I started thinking it might be best, this time, if I don't make this all about me.

My story, "Crunches," gets me off, and I hope you love it, too. But for the blog tour, I decided to submit to a few of the other authors and see what kinky visions they had to offer. When I'm submitting, I, of course, don't want to be in control. I didn't want to have to agonize over which of the 69 delicious visions available I ought to choose—68, I suppose, since I'm leaving myself out of it. I especially didn't know how to choose when I've already shivered delightfully to work penned by so many of the names in that table of contents—Kathleen Tudor, Giselle Renarde, Valerie Alexander, Jade A. Waters, and the list goes on... Besides, I know Rachel always makes an effort to include new voices in her books, and I didn't want to rule out the chance of an intense encounter with an exciting stranger.

The only way to properly submit, I decided, was to make it random. So I took a trip to my favorite random number generator and let the fates determine what submissive tastes I would explore. I swear this is true: I drew my own story first—I take this as a sign that I should again remind you that I melt to the thought of a stern personal trainer controlling me, that I love the idea of wanting her more than I want to be her, and that following a list of instructions makes me tremble. But, persevering, I drew three new numbers, and this is what they led me to:

Draw 1: "The Test" by Kristina Wright

Suddenly, the constriction around my neck is no longer a hindrance, it's a promise.


Kristina Wright is a beloved name—not long ago, I enjoyed her kinky anthology A Princess Bound, and I've also had the privilege of writing for her. Her entry to The Big Book of Submission concerns a collar—a particular favorite of mine. There are many nights when I fetch my collar, run to my dominant, kneel while it is fastened around my neck, and then curl up in a nest on the floor of the office and languish like a pet. This is one of my favorite things in the world, and I don't need much more of a scene than that to glow with the sense of safety and being cared for, to warm with the arousal of trust. I am always thrilled to read a story that focuses on a collar and what it means, rather than simply seeing it as an accessory to a caning or what have you.

The protagonist in "The Test" turns out to find collars challenging. She doesn't like feeling anything around her neck, and this fact ratchets up the level of trust required to play with a collar. I loved the psychological depth of this story. There are layers of trust—inside and outside of the bedroom—and the story portrays a very interesting interplay between the BDSM life of the couple at its center and the public life they have and share. Just as there are several types of trust at play, there are also several tests. The story packs a lot of meaning into a small space, offering a satisfying exploration of the experience of being collared.

At first, the word "bulldog" in the title made me think I'd come across another collaring story. The bulldog in question, however, turns out to be the bulldog clip, a particularly terrifying office supply when you've got one of those dominants whose favorite stores are Home Depot and Staples. 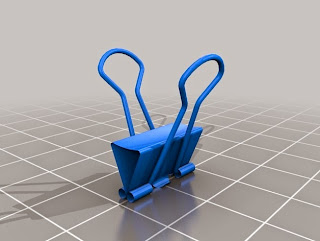 bulldog clip (klapka) / CC BY-SA 3.0
Just take a look at that baby and imagine it clamped...anywhere. As a person who enjoys clamps, I prefer the type with adjustable tension. They're a whole lot easier to take because I can build up to high intensity. The type that are made for papers rather than people are much, much nastier. You'll be shocked, I'm sure, that this bulldog clamp is used in the story in a nasty (read: extremely—or should I say, delightfully—painful) way.

This story is of the hot fantasy variety. I could picture myself caressing its details piece by tiny piece as I slowly turn the vibrator levels up one button flick at a time. First, the protagonist finds an unlocked door. Then she hears a gasp of pain—"needy, obvious and sexual," Ashton informs the reader. Then she's drawn into this filthy scene with the bulldog clamps, uncertain whether she wants to be on the giving or receiving end of the pain. This reads like a sincere and heartfelt fantasy, the tones of longing struck through the prose like veins of gold. There is also attention to the nature of the need for pain, a recognition of that turn of the mind that transforms the terrible into the deeply desired. I haven't read Ashton before, I don't think—this is what I meant about being open to encounters with strangers.

Everyone needs his release and my Master finds his in controlled pain—his control over the person giving him the pain: me.

Oh, this one is an amazing draw. Last fall I was at a kinky event where I attended a workshop given by the fantastic Ms. Suzanne SxySadist. She pointed out that people often make the following associations: dominant=sadist, submissive=masochist—but they're not necessarily the rule. Indeed, I have met people who don't follow those stereotypes, and I don't think I do either. I'm a submissive (see collar story above), and I'm a masochist (see clamp musings above), but I've realized lately that I really don't enjoy combining the experiences. I want to be in control when I'm being hurt, and when I'm submitting, I want to be cared for and coddled. Anyway, Ms. Suzanne's workshop involved the drawing of a chart (and, if it's not clear from what I said about office supplies and following instructions, I love charts). The chart showed all sorts of possible combinations of the four letters of the BDSM acronym, and seeing them mix and mingle made me shiver both as a kinky person and as a writer.

All that to say, that's what Ginger F. is exploring here. "The Chrome-Plated Connection" is about a very dominant dom—he is stern, he is allowed to pull his submissive away from the computer, and he is allowed to dictate when and whether she will come. It's very clear that he's calling the shots of the relationship, and at first the story seemed to be building up to some sort of typical spanking story or service submissive story, and I was ready for the protagonist to get her ass cheeks reddened or to have to perform a tedious chore wearing only an apron or some similar thing (not that I can't love those stories, too). I was, however, delightfully surprised to discover that the nature of her service is to hurt her master, with nipple clamps specifically. He is in control of how, when, and how much she is hurt, and I was fascinated by the way this is described by Ginger F.

Even more interesting to me is that the protagonist doesn't seem like the precise, perfect-fit opposite to the Master (another subject I've thought about a great deal). That is to say, she doesn't seem to be a sadistic submissive to exactly complement her dominant masochist Master. Rather, she reads as a submissive through and through, turned on by obeying him and pleasing him. I loved this a lot, both for its unusual combinations of kinks and for its recognition that people fit together the way people do, not as the solution to an equation where you subtract x from both sides and come up with the one true answer. 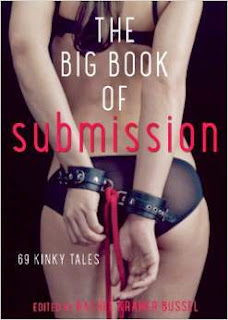 Those are all the experiences I've got time to share with you, but trust and believe that I'm going to have 65 more on my own time and in the privacy of my own mind. You can submit to The Big Book of Submission, too (or dominate it, I suppose, if that's the angle from which you will read it)—one of the places you can pick the book up is here.

You can find every stop on the blog tour here.

(Cross-posted from annabetherotica.com)
Posted by Annabeth Leong at 12:30 AM