I've got a new story out! "Scissoring" is part of the first anthology from Sexy Little Pages, a collection of tattoo-themed erotica called Inked. 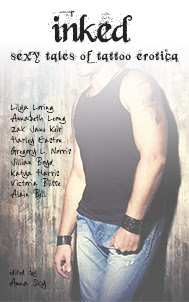 Here's a quick description of my story:

Letty’s tattoo of scissors was meant to symbolize cutting ties with the past—but when a sexy woman takes it as a declaration of her love for scissoring, she can’t resist going along. In the process, Letty discovers new attractions, and new confidence.

I thought it would be fun to give a behind-the-scenes look at how I came up with the idea. The seed of the idea was this article of clothing, which I own (in both gray and teal) and love to wear: 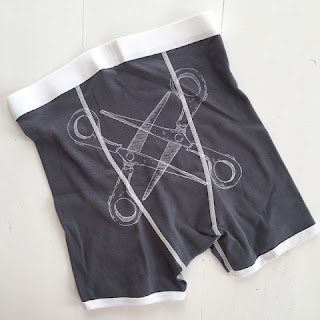 I also own a muscle tank with the same design on it, and I feel totally hot in it. It's become part of my official outfit for reading my lesbian erotica. Both boxers and the shirt come from Autostraddle, one of my favorite websites.

I owned the boxers and wore them under my clothes for secret thrills for quite some time before I got up the courage to actually wear the scissoring shirt. Before I did, I spent a while looking through reviews to try to pinpoint exactly how often people figured out the queer reference—particularly straight people. Ideally, I wanted other queer people to get the joke, but I wasn't sure how I felt about straight people picking it up. I've actually been surprised by how often I encounter straight people who have no idea what the scissors mean. When I first wore the shirt, I sort of felt like I'd put on a flashing neon sign that said "queer." In my daily life, though, most people don't get the significance of the scissors unless I point it out.

When I read the call for submissions for Inked, I was wearing my scissoring shirt. One of my first thoughts was how much I love that symbol and that shirt and how I would totally tattoo it on myself. That got me thinking about the difference between the way I expected people would react to the scissors and the way they actually do react.

From there, it wasn't far to the idea behind the story. I reversed the expectation and the reality: Letty in the story gets a tattoo of scissors without realizing its queer implications, but her life is changed by a woman who reads it as a reference to lesbian sex.

I had a lot of fun writing the story, and I hope you check it out, along with the rest of the anthology!

This is the description of the full book:


Tattoos are intimate and personal, yet can hide as much as they reveal…

In Venomous Ink, a vibrant tattoo shows there’s much more than meets the eye whilst an art student longs to ink the object of her desire with her permanent markers, in Sign Your Name. An uptight commuter finds herself attracted to her polar opposite in Uncovering Heather, while the ultimate Dom looks to get what he deserves in Her Midnight Roses.

And in Nine Lives, a top tattoo artist has never forgotten one particular customer and when they reconnect, she discovers he has new ink for each new life.

You can pick it up here:

If you'd like to check out other stops on the Inked launch tour, keep an eye on these sites: