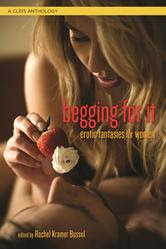 I find the title a little ironic, because my intention with the story was for the protagonist’s gender to be open. I very consciously and carefully constructed the story in such a way that it would not have to conflict with any reader’s gender identity, though it will probably fit best with someone who feels a bit fluid or identifies as genderqueer.

You feel intermingled with Jane, knowing that this could easily have been her standing where you are now, a curl of anxiety in the pit of her stomach, a chill from the air settling into her skin. Since the three of you got together, you have been entranced by the fluidity of the boundaries between you. Sometimes in bed it's as if Jane's cunt is your own, but the same goes for Rob's cock. Often you close your eyes and allow yourself to float between the two, as if your body is an ocean wrapping around their two definite and opposite forms.

I wrote it in second person, an unusual choice for me, because I wanted to use certain effects of that point of view.

First, second person allowed me to avoid gender when referring to the protagonist. I didn’t have to jar anyone with pronouns I didn’t want to use.

But why not use first person?

There’s a pitfall to second person where it can feel as if the author is accusing the reader of things (i.e. author writes: “You’ve never liked cookies,” and reader thinks, “What the fuck are you talking about? I love cookies.”) The flipside of that, though, is that, for me, second person can read as a variation on first person, and a more private one at that.

If I’m talking to someone else about myself, I’ll say I, as in, “I went to the store yesterday,” or, “I think that’s nonsense.”

If I’m talking to myself about myself, though, I’ll say you, as in, “What did you say you wanted to get from this room?” or, “All right, you can do this.”

Since I address myself as you, the second person can read as that very intimate voice of the self reflecting on the self. It has a half-whispered quality to me, a sense of privacy that goes beyond that of a diary entry.

That’s the feeling I wanted for this story.

I’m excited to share it with readers, and to read for myself the rest of what’s in the book.

Here’s the official blurb for the collection:

What would you give — or give up — to fulfill your most cherished sex fantasy? In this Cleis Press collection, erotica editor Rachel Kramer Bussel brings us femme fatales and shy women, women on a mission and women opening up to new worlds of discovery: women who know what they want and are not afraid to beg for it! Let yourself go with these 21 tantalizing tales of tortuous longing and release.

You can preorder it now, and it’s currently scheduled for release on July 12th.

Posted by Annabeth Leong at 3:04 PM