Me and My Boi: Not Just Hair 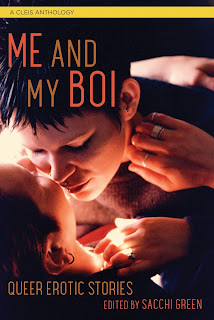 I was going through some stuff when I wrote this story. I came out as bisexual when I was a teenager, but over the course of my life I’d wound up semi-closeted again. Though I told people I was queer if the subject came up, most people saw me as straight. After years of being told bisexuality was just a phase, I’d even started to believe it. When I thought about it, I sometimes wondered if saying I was bi was a way of trying to claim a place in a queer community I didn’t really belong to, of trying to portray myself as special when I was actually just run of the mill. Alert readers will probably recognize the internalized biphobia in those wonderings.

Then a series of things went down at the beginning of my thirties that forced me to start taking my queer orientation seriously again.

For one thing, I fell madly in love with my best friend, in that deep, undeniable way that wreaks havoc through a whole swath of relationships. Nothing looked the same in my life after that happened, even when I was still trying to claim things like I loved her but I didn’t love her that way.

A publisher asked me to submit a proposal for a possible novel, something I really wanted to write deep down. I came up with a story I cared about it and sent it in—then heard back that the publisher was worried that the book would be “too queer” for the intended heterosexual audience. That was news to me. After being told so often that bisexuality was a phase and I must actually be straight, I’d eventually started to assume that I must… actually be straight. My thoughts and feelings about women must be normal and common, things any straight person would think. This was the beginning of a wakeup call that, no, straight women don’t seem to think the way I do.

Another publisher had a call for butch/femme novellas. At the time, I wrote stuff for as many calls as I could. I just wanted to write fast and well and make a living at this career. I didn’t think I had any particular interest in butch/femme novellas (I had never thought of myself as butch, and none of my girlfriends had presented in a particularly masculine way), but I decided to give it a shot… Only to find myself melting my own panties off as I typed. There was an undeniable fire for me in the butch/femme dynamic, something I didn’t normally feel when I wrote erotica. The editor who accepted my book wrote to me about how authentic it felt, how my butch character came out so masculine and so thoroughly a woman at the same time, and how different and refreshing that was compared to a common “pretend a male character is female” theme she’d seen in submissions. While praise is always nice, I was bemused by this. I hadn’t experienced any difficulty in writing a butch character.

By now, this was adding up to a serious crisis of identity. I had forgotten how to take my own sexual orientation seriously. My life had built up around me in a way that made that hard to do, but now things were boiling out of me that I couldn’t hold back anymore.

I remember the weekend I wrote “Not Just Hair.” My male partner was away. I thought I would bang out the story in a couple of hours and spend the rest of the time relaxing. Instead, I found myself writing and crying and putting together the pieces I wrote about here and then some.

A while ago on Twitter, I talked about how I’ve realized that anger fuels much of my writing. Reading “Not Just Hair” now, I think it’s a really hot story. At the same time, I see the core of anger inside it, the desperate feeling you get to escape the roles that start to trap you, the need to reinvent yourself, the fucking unbelievable exhilaration and freedom you get when you take the steps you need to take. The story was out ahead of me, as my writing usually is, but I did follow it.

At the time, I was feeling my own queerness bubbling up, forcing its way into an active role in my life. But when I read “Not Just Hair” now, I see more than that. I see questions about gender presentation and masculinity and femininity that are still active sources of confusion for me. I see a desire to break out of kink roles and try new ones.

Here’s what I wrote in the story:

Years ago, Darla had naively believed that coming out as a lesbian would put an end to agonizing conversations about her sexual identity, but in fact those moments had marked a beginning. Ever since, it seemed she'd been struggling to figure out and articulate more about what she wanted to do and how she wanted to do it, and to negotiate with partners about whether what she wanted was okay.

I haven’t gone into what’s behind the title of the story yet, but that’s important, too. I’ve been talking about big stuff, things that go to the core of a person’s identity. In the throes of that sort of change, it can feel overwhelming and impossible. But it’s amazing how something that might seem small and trivial can take you a very long way. Something like a haircut.

I didn’t get the courage to take a razor to my head until last fall, but it’s amazing what changed when I got the undercut I’d been dreaming of. I feel more confident, more able to talk about my various identities, less apologetic to everyone. So as deep as the questions can get, sometimes a haircut can be the tipping point. Because it’s not just hair.

You can order the book here or at your favorite local bookstore.

I wrote this as part of the blog tour for Me and My Boi. You should check out the rest of the posts at the links below, and comment for a chance to win.

Anyone who comments on any of the posts will be entered in a drawing for one free copy of the anthology. You can comment on more than one post and be entered more than once. The winner will be announced and notified by July 5th, if not sooner.