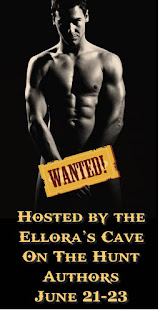 Welcome to my little corner in the On the Hunt blog hop! On the Hunt is a series of books published by Ellora's Cave on the theme of bounty hunters. Be sure to scroll to the bottom of the post to see links to what my fellow authors have done, and information about what I'm giving away!

For my entry, I thought I'd share some of the research I did on bounty hunting as a profession.

I'd always associated bounty hunting with Boba Fett from Star Wars, so the first thing I did when I decided to write for the series was find out what the job is in the modern (not science fictional) world. I discovered that bounty hunting is illegal in many places, and it's an odd, Wild West sort of thing in the U.S.

When people in the United States get arrested and sent to jail, they often have the option to put up some money as bail. When a person does this, he or she earns the right to go free until the trial, at which point the money gets returned. However, a bail bondsman can put up bail instead, essentially giving the person a loan for that amount. Then, if the person doesn't show up, the bail bondsman forfeits the money they loaned.

Enter bounty hunters. An 1872 Supreme Court decision called Taylor v. Taintor is widely credited with giving bounty hunters the freedom they currently have in the U.S. To paraphrase roughly, that decision determined that the bail bondsman functions like a jailer, and so can do the sorts of things a jailer might, such as seize or imprison a fugitive. By extension, the bail bondsman is able to farm that out to bounty hunters, who have some pretty extraordinary rights in a lot of states. For example, in many places, they're allowed to break into a fugitive's home to retrieve him or her.

Some states don't require any sort of licensing—-all you have to do to be a bounty hunter is say that you are one. My state, Rhode Island, is one of the lenient ones. This post explains:

Bounty hunting in Rhode Island is not governed by any specific legislation... Because of this laxity in legislation concerning fugitive recovery, Rhode Island can be 1 of the easiest states to find employment as a bounty hunter under a properly registered surety agent.

Bounty hunters are freelance workers who typically get paid a percentage of the original bail. According to this post, the average bounty hunter salary is between $25,000 and $50,000 a year. So, while it's a glamorous job, it's not likely to make a person rich and famous. On top of that, because the work is a bit uncertain, it lacks stability. The same post says bounty hunters usually get 5-10% of the original bail. In larger cities, it says average bail is $20,000-$50,000, which would work out to $2,000-$5,000 a job for the bounty hunter. It's not chump change, but it seemed clear to me that it could be a tough life.

I'm going so much into financials because these numbers actually turned out to be the main inspiration for my book for On the Hunt, which is called The Fugitive's Sexy Brother. I envisioned a woman (named Emily Boysen in the book) who is determined to be a bounty hunter. However, because she's not entirely confident about competing for the most lucrative jobs, she scrapes by on low-level work, getting paid $500 here and $250 there. When the story begins, Emily is tired of struggling and ready to try something bigger.

Next, I imagined the villain, her ex-boyfriend Matthew Lodi. Matthew made a name for himself years ago with a really big score. He got paid so well for that job that he thought he'd hit the big-time and bought a super-expensive sports car, a Lotus Elise, California Edition. Unfortunately, Matthew soon learned that those kinds of jobs don't come along every day. At the point we meet him in the story, work has dried up to the point that Matthew is resorting to some pretty dirty tactics to keep his car.

Odd as that path is, this is usually how I come up with story ideas. I start learning about the subject I want to write about until something grabs my attention and characters and a story begin to form around it.

Read on for a blurb about the book that resulted from this research, information about the other authors in the series, and a giveaway!

Emily Boysen is sick of low-level bounty hunting jobs that don’t pay her rent, and sick to death of her ex-boyfriend taking credit for her work. Ready to claim her due, she takes on the quarry of a lifetime, the notorious Fernando Bonavita. But instead of the fugitive, she captures his sexy younger brother, Javier.

Javier Bonavita never wanted to know the truth about his older brother’s activities, instead protecting him out of loyalty. When he uses his hacking skills to pose as Fernando, he never expects to uncover crimes he can’t stomach. Beautiful Emily has no idea how glad he is to be in her custody—as long as he’s her prisoner, he doesn’t have to face his brother.

Passion flares between Emily and Javier, and soon he’s putting the handcuffs on her. Suspicion grows along with their feelings, though. A sinister plot centers around Fernando, and untangling it will test their loyalties to the limit.

I'll give away a $5 gift card to Ellora's Cave to one lucky commenter. Please include your e-mail address in the comment so I can get in touch with you, and tell me if you'd rather be the hunter or the hunted. I'll select the winner randomly on June 24, after the blog hop is over. Good luck!
Posted by Annabeth Leong at 11:30 PM