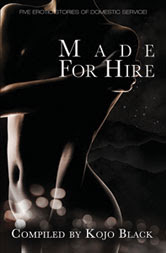 So, after much hilarity regarding international mail, I can finally announce something I've been dying to tell you for months now. I'm on board for a new anthology published by Sweetmeats Press, Made for Hire. This book, which promises "five stories of domestic service," promises to be a smoking hot one.

Here's the blurb for my story, "Safekeeping":

While house-sitting, a young woman finds herself falling in love with the homeowner. So she sets out on a campaign to make herself an indispensable part of his home…and his life.

I love Sweetmeats Press because publisher Kojo Black embraces the wild, dark, and sensual with the taste and gusto of the best sort of epicure. (And he's the kind of guy who both uses and inspires sentences like that).

I've had the idea for "Safekeeping" brewing in the back of my mind for a long, long time, but sometimes it takes a special kind of permission to really let loose. This isn't erotic romance, it's a tale of obsession and taboo. While I was writing "Safekeeping," I kept thinking to myself, "Is that too much?" Then I would remember other things I've read in books by Sweetmeats and the whole tone of my communication with them, and think, "No way is this too much." I don't know if I can explain how exhilarating it is to write this way. I find that sometimes there's a certain magic that comes about in the combination of subject matter, editor, and author that produces conditions conducive to this sort of writing.

I'm also thrilled to be sharing space with the amazing Kyoko Church again—-her story "Sweet. Sweeter." is also in the book. If you haven't read her stuff, you're really missing out.

I think I've made it clear how excited I am. I'll end with an excerpt, and will post more details once the book goes on sale (which, in ebook form, will be just a few days from now).

This is a little piece from "Safekeeping." Enjoy!

Underneath the money he’d left for me, a slightly curled piece of paper bore his handwriting. Michael always pressed hard when he wrote, and this paper still hadn’t recovered. I skimmed mundane phrases. The only unusual detail was that he’d bought a new collar for the dog, and he told me where to find the old one in case she suffered any chafing.

Frustrated, I picked up the note and peered at it more closely. “Is this all you’re giving me, Michael?” I whispered. Hadn’t he understood? I wanted more. That’s what I’d been trying to tell him.

I ran my fingers over the imprints his pen had made, then stiffened, feeling lines where he hadn’t made marks. This page bore the grooves of a previous effort. Burning with curiosity, I looked closer, tracing the shapes of the letters. If it had said anything else, surely I would have struggled to follow its meaning. Instead, it leapt off the page and straight into my heart.

Michael had written my name, over and over. At the bottom of the paper, I found a large question mark.

I reread the note carefully, forwards and backwards, word by word. Then it clicked. He mentioned he’d bought a new collar for the dog, but was she really likely to need the old one as a backup? Clearly, that was a gift for me.

You can learn more about the book here.
Posted by Annabeth Leong at 10:36 AM