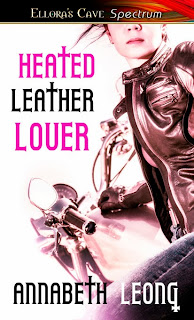 I've been going on and on at various places in the Internet about how hot this book makes me, and now it's time to prove it. Here's one of my favorite scenes—I wrote it early on, and it set the tone for what would be going on in this novella:

Tam stroked Yasmin’s hair. “How many spankings should you get, little girl? How bad have you been?” She wanted to give the woman a chance to set expectations. For some bottoms, taking ten hits was practically edge play. For others, taking a hundred was just warming up.

Yasmin turned her face upward, her expression veiled by a curtain of her thick, curly hair. She bit her lip adorably, into her part already. Her mouth formed the letter “F” but she didn’t speak a word. Tam thought her hesitation meant she was pushing herself, and indeed she seemed to be waffling about whether to follow the “F” with an “O” or an “I.” Tam grinned and hurried her with a sharp, fast strike to one bared cheek.

“Which is it?” she pressed. “Is forty enough, or were you so bad that you need fifty?”

Another slap. “Ask me for it, baby. Tell me what you need and I’ll take care of you.”

“Oh God.” Yasmin sighed and jerked, then decided on another vowel altogether. “Fuck me.”

“Oh, sweetie.” Tam couldn’t resist an affectionate kiss to the back of her neck. “You’ve been terribly neglected, haven’t you?”

“I’ll fuck that pretty pussy soon. First, though, you have to tell me how much to spank you. After you get your punishment, you can have your reward.”

Tam obliged. She paced it slowly and evenly so she had time to watch Yasmin’s reaction. Sometimes she enjoyed striking with an irregular rhythm, toying with her bottom and making it impossible to brace at the proper moment. With Yasmin, however, she still wanted to be careful and keep an eye on how things were going. Also, Yasmin was glorious. She responded to each hit as if Tam’s hand had pushed deep into her pussy, arching her back, lifting her head and letting out orgasmic moans. The cheeks of her ass blushed slowly and deeply, a dull pink gradually blooming from beneath her dark skin until she glowed. Tam’s palm tingled and sparked every time it made contact with Yasmin’s beautiful, round ass.

Yasmin didn’t seem to feel any real pain until Tam reached about twenty-five, at which point she began to give sharp little rocks after every hit, making her cheeks jiggle. Tam, by this point, had to resist squirming herself. She hadn’t seen anyone as hot as Yasmin in God knew how long, and it had been even longer since she’d actively participated in a moment as sexy as this. Consider me distracted, Tam thought, allowing herself a victory smirk.

She laid into Yasmin harder and faster. Yasmin yelped and, for the first time, tried to twist away, beginning a running motion that was stopped by Tam’s muscled thigh. Tam held her in place with one hand and kept spanking with the other. They’d both started to sweat, and Yasmin’s helpless struggles set off a hard delight in Tam. “No,” Yasmin breathed, and even though that wasn’t the safeword, Tam stopped immediately, just to check.

She swirled a soothing hand through Yasmin’s thick hair and waited a few seconds. Then she asked, “How are you doing, honey? You still okay, darling? You still having fun?” Tam didn’t know where all these endearments were coming from—she normally wasn’t so gooey. Something about Yasmin brought out all her deepest, most protective instincts. For a dizzying moment she saw herself guiding Yasmin into her favorite bar back home, the beautiful femme tucked under one of Tam’s strong, leather-clad arms and her every sweet curve nestled against Tam’s body in an attitude of perfect, submissive trust. She shivered and forced herself to focus on how Yasmin responded to the question.

“Mmm,” was all Yasmin said.

“You’re in la-la land, huh?” Tam rubbed Yasmin’s back. Her unbuttoned silk blouse had ridden up and Tam wound up stroking her knuckles across soft skin made sticky by strain and arousal. That shot straight to Tam’s clit. Jesus. This woman really made her lose her head. “Talk to me. You’re a little more than halfway through your spanking. Do you want to keep going?”

“Fuck me. Please.” Yasmin’s voice sounded indistinct and Tam realized she was sucking on one of Tam’s leather chaps. She chuckled.

“Not until you take your spanking, naughty girl. You just remember to use your safeword if you need to, okay?”

Yasmin nodded vigorously and tongued the leather some more. Tam took that as permission to give it to her hard. She didn’t hold back at all this time, really whaling at her ass. The hard, staccato blows started a sympathetic ripple in Yasmin’s ass that just about hypnotized Tam. She loved the sight of all that sweet flesh rolling just for her.

Yasmin whimpered, her hips jerking in an unmistakable rhythm against Tam’s leg. She didn’t forget to count, either, though the numbers she pronounced came out slurred and confused and Tam was pretty sure they should have gotten through the forties a lot faster than they actually did.

By the time they hit fifty, Tam couldn’t take it anymore. She stroked Yasmin’s backside for a count of ten, just to keep herself from moving too fast, but then gave in to her desires and ordered, “Strip.”

“What?” Yasmin really had dropped into subspace. She lifted her head and blinked at Tam with wide, innocent eyes.

Tam gave her a gentle shove to signal that she could get out of position. Yasmin stumbled to her feet, moving as if drunk even though Tam knew she hadn’t given Yasmin time to drink more than a few sips of that beer. “You keep asking me to fuck you, sweetheart. How am I supposed to do that when you’re still wearing all those clothes?”

“Oh.” Lust and understanding dawned over Yasmin’s face and she struggled out of her already disheveled outfit. She shrugged off her open shirt. One of her breasts had climbed up out of its bra cup during the spanking, the nipple hard and dark and perched just above the lace rim. Her hands trembled as she worked on the zipper of her skirt, and she almost fell over trying to step the rest of the way out of her tights.
Tam took pity on her and stood up to stabilize Yasmin instead of continuing to watch her delicious battle with her clothing. On the other hand, maybe Tam just couldn’t wait any longer to touch all that soft, inviting flesh. She pulled Yasmin against her and sucked on her earlobe while teasing her hard nipples. Yasmin gave up on trying to push her thong down her hips. Instead she sighed and melted into Tam’s embrace. “You smell like leather,” she said dreamily.

Tam grunted with satisfaction and growled in a low voice, “You like that, don’t you?”

You can get the book here. Or, if you prefer, Barnes and Noble or Amazon. This book is part of Ellora's Cave's Hot Pink series—you can see the full collection here.

Also, I'm running a giveaway!
Posted by Annabeth Leong at 8:00 AM