New Release: Yield To Me

I've got a serious weakness for MMA, and I was extra excited when I saw that this book features a female MMA fighter! Enjoy! 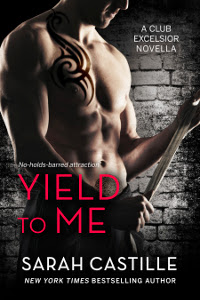 BLURB
Below the belt, no-holds-barred attraction...

Amateur MMA fighter, Marcy Foster is determined to win the state championship. But dark secrets and a broken trust mean there's one submission she just can’t master. Fortunately Club Excelsior has hired a coach who knows all the right moves.

Sexy, confident and commanding, fight consultant Jax demands control, both in and out of the ring. But once he has Marcy against the ropes, Jax knows he’s in too deep. He has the dominance to give her what she needs, but once he unleashes her hidden passions, there's no going back.

Under Jax's skilled hands, Marcy submits to her deepest desires. But when her personal and professional worlds collide, she is forced to face a brutal truth—yielding to her darkest needs may be the one thing that costs her the fight...and her heart.

“Mount.” Jax beckoned her forward, his voice curiously husky, and for a moment she wondered if his touching exercise had affected him as much as her.

Marcy crawled up his body and then sat astride his abdomen in Full Mount. God, his stomach was rock hard. Just like the rest of him.

Jax’s body stiffened beneath her. “Christ, Marcy. Are you trying to kill me?”

Puzzled, she shrugged. “I thought you wanted me like this.”

“I do. No. Hell. I mean…to practice the submission, you need to be in High Mount.”

Understanding dawned and she tried and failed to repress a smile. “Am I mounted too low for you, Jax?” She was sorely tempted to give a little wiggle because she could feel something hard pressing into her ass and she was desperate to know if he was wearing a cup. In all her years of training she’d never affected a guy this way and she had to bite back a laugh.

His eyes blazed with liquid heat and his voice dropped to a husky bark, “Move up.”

Marcy eased herself up, her thighs parting wider as she positioned herself high on his chest, her knees under his armpits. “High Mount is easier with female fighters. Your chest is so broad…”

He cut her off with a low growl. When she glanced down to see what she’d done to irritate him this time, she was caught in the blistering heat of his gaze.

“I’m on to you, little fighter.” His eyes glinted, amused. “Don’t think for a minute you’ll distract me from doing what I came here to do.”

A smile curled her lips. All week she’d had to listen to the fighters at the gym talking about the aura of mystique surrounding Jax and his “fighter whisperer” ways. And yet his visible discomfort at her position on top of him made him seem all too human. All too male. “Wouldn’t dream of it.”

He raised an eyebrow and exhaled through gritted teeth. “How about we try for Mid Guard?” The warmth of his breath caressed her inner thighs and heat flooded her veins. How unprofessional. She’d practiced this position countless times with other fighters in the club. Not once had she ever wanted to tear off their clothes and…

“Actually, probably better if we move to Full Guard.” Jax bucked suddenly, throwing Marcy forward and onto her hands and knees, a standard defense to High Guard, but one that put her breasts within an inch of his lips.

Her nipples tightened and she quickly rolled to her back to hide her body’s response.

Jax moved into position on top of her, taking his weight on his elbows, his legs tucked between hers. So hot. So heavy. So masculine.

Coach. Training. Professional. But her body, now a live wire, wasn’t on board.

“How do you want me?” Her breathy voice shaded into a whisper.

CONNECT WITH SARAH:
Sign up for Sarah's newsletter for info about new releases: http://bit.ly/LgFZlb