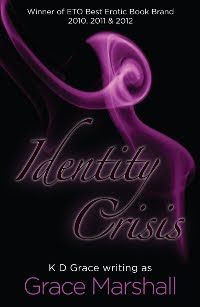 Reclusive romance novelist Tess Delaney is the alter ego of Garrett Thorne, bad-boy brother of business tycoon Ellison Thorne. When Tess is nominated for the Golden Kiss Award, Garrett recruits PR specialist, Kendra Davis, to keep his secret and be Tess for the awards despite their mutual animosity. But when Tess is stalked by a rabid fan, an identity crisis is eclipsed by a battle for survival, and Tess Delaney, the woman who doesn’t exist, just might understand Kendra and Garrett’s hearts even better than they do.

Other links will be added here as they become available: http://gracemarshallromance.co.uk/books/identity-crisis/

Garrett felt like a naughty teenager as they sneaked out the back door, through the gate of the privacy fence and down the alley. He wore a shapeless track suit with the black hoodie pulled up over his head and a scruffy pair of Converse sneakers that weren’t exactly meant for dancing. And Kendra, well she hardly looked ratty, in his opinion. She wore low rider jeans, and where they weren’t hugging her body like a second skin, they were full of threadbare, flesh revealing holes. The black sweat top she wore was cut short enough to show a tantalizing flash of her navel and hips bones when she moved just right. It slid off one shoulder to reveal the thin lacy strap of a red bra. She wore all of her russet locks tucked up under a leather beret. Her fashion statement was topped off with black ankle boots. She looked very, very dangerous. And hot. Of course she didn’t need to dress the part for either, he thought. He was already certain on both counts.

‘You live a little closer to The Boiling Point than Dee does.’ She took his hand and nodded to where the alley T’ed with the street, and then gave way to the park on the other side. ‘She never goes there, of course. Well she did once, but that was just for Harris, then he hated it.’ She giggled. ‘God I wish I could have been there for that.’

She shook her head. ‘Probably not. You’re much more of a bad boy than Harris is, or is that all an act?’

The long line of shiny chrome Harleys out front of the squat cinder block building gave Garrett the first clue that this was not Dancing with the Stars. Kendra waved them away absently. ‘The Boiling Point’s not really a biker bar, but it’s kind of the warm-up act, I suppose you could say. Lots of bikers start off here before they head on to their usual haunts. Makes for an exciting mix. Later in the night there are almost no bikers. But there are always lots of interesting people.’

Any other time, Garrett would have been up for meeting interesting people, but tonight he couldn’t imagine anyone interesting him more than the woman on his arm. He paid the fee at the door and a surly man the size of small house with fire-engine hair and a scruffy beard stamped their hands with a red ink TBP.

Inside a live band had just begun to play to a full, but not yet crowded house. ‘The place gets raided from time to time,’ Kendra said. ‘I don’t know what all goes on. I just come here because it’s interesting.’

‘A good raid and us carted off to the police station will really give the press something to talk about,’ Garrett observed.

‘Don’t worry,’ she yelled to be heard above the band’s bass-heavy version of Highway to Hell. ‘They just got raided last week. They’ll be good to go for a while now. We can relax and enjoy ourselves.’ She pulled him onto the dance floor. ‘Best dance while there’s room. In a few hours it’ll be a real tit squeeze.’

Kendra Davis was just as stunning dark and dangerous as she was golden and romantic, as she was naked in his kitchen, and she definitely knew how to move on the dance floor. But it made Garrett more than a little nervous that he wasn’t the only one who seemed to be noticing the way the woman could shake her booty. He thought about asking her to try not to draw to much attention to herself, but he wasn’t even sure it was possible for Kendra Davis not to draw attention.

The place smelled of leather and beer, and sweat. Already there was a thick haze of pheromones invisible to the eye, but everyone there breathed them it, gave them off and reveled in the dark anticipation of what the night might bring. The look in Kendra’s eyes was bright and wicked, like she would do anything, try anything, like all the boundaries were suddenly negotiable.

As though she were reading his mind, she pulled him to her with a hand curled around his neck and spoke against his ear. ‘Oh would you relax, Garrett. Do you really think this is the kind of hang-out Tess Delaney would frequent?’

Then she slid both arms around his neck and let him pull her into a deep, hungry kiss. When it ended with an aggressive flick of his tongue, she offered a throaty giggle. ‘Marking territory, are we?’ Before he had a chance to respond, she returned the favor, plunging her tongue in deep, and tightening a fist in his hair to pull him closer.

He moved a hand to the small of her back and gave her the full frontal rub-up, enough to be sure she knew she’d gotten his cock’s attention. ‘You see where this is leading if you keep that up?’

She pulled away and gave his crotch some breathing room as the music settled into a heavy metal beat that filled the dance floor with lots of heavily booted bikers and their spandex and leather women. Garrett was surprised to find more than a few men in pressed jeans and designer polo shirts bellied up to the bar in the mix that looked like it was probably mostly low-brow. He wasn’t the only man who looked like he’d just come from a work out at the corner gym and Kendra’s shredded jeans seemed to be the fashion statement of more than a few women among a smattering of Goth and grunge and plain old red-neck jeans and tee-shirts with baseball caps.

With each song the band played, the dance floor became fuller and fuller. The strobe light flashed and the disco ball bathed the floor in sparkles as people rocked and strutted and sweated, and it became more and more difficult to tell who was dancing with whom. Garrett was about to grab Kendra by the hand and reel her back in so they could stay connected when a biker in a ZZ Top tee-shirt that smelled like an ashtray and looked like it might have been painted across his bulging pecs managed to slide in between them, turn his back on Garrett, and focus his full attention on Kendra. And suddenly all Garrett could see was his broad back.

‘Kendra,’ he called, but his voice was drowned out in the roar of Def Leppard. And that might have been okay if the man hadn’t been so fucking big. Kendra was certainly entitled to dance with whomever she liked. But he couldn’t see her. He fucking couldn’t see her! Not even her feet between the man’s shuffling boots. ‘Kendra!’ He called again. Louder this time. That at least got the man’s attention, but when he turned to see what Garrett wanted, and he could see beyond the biker’s bulk, Kendra was not there! The woman the man was dancing with had cropped blonde hair and a leather bustier several sizes too small.

‘Kendra!’ Garrett called out, louder this time, shoving his way past the biker, who pulled the blonde to him protectively. Frantically Garrett scanned the burgeoning crowd on the dance floor, scanned the women with hats. There were cowboy hats, police hats, even a few stocking caps, but there were just too many people, too many lights, too much noise. In his mind he could only think of Razor Sharp’s horrid email and Kendra’s response to it. Why the hell hadn’t he forced the issue? Why the hell hadn’t he made her tell him why she was so upset, made her tell him about the stalker Dee had mentioned. And fuck! Why had he let her talk him into bringing her here?

Grace Marshall lives in South England with her husband and the growing gang of hooligan birds who frequent their feeders. When Grace isn’t busy writing something sexy and romantic, she’s busy digging in her ever-expanding veg garden or walking across the British countryside. She finds inspiration outdoors in nature, and most of her best story ideas come to her while she’s walking or gardening.
Grace is the author of the fast paced, quirky Executive Decisions Trilogy  published by Xcite Romance. The first and second novels in the trilogy are out now.