The Perfect Dom by Lucy Felthouse 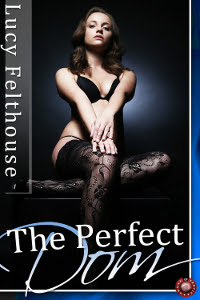 I've read the first story in this collection -- a luscious bookstore fantasy. With that good start, I'm eager to see what else Lucy delivers in these kinky visions.

Balancing the Books
Philip’s a well off man, and doesn’t need a job. But when he sees the gorgeous owner of his local bookshop, he applies for the role that’s being advertised there immediately. He’s totally stricken by the stunning Giovanna, and when it turns out she wants to boss him around in a sexual sense as well as an employment sense, he has no intention of refusing.

Feeling the Heat
Taylor and Maisie’s car has broken down. Luckily, Taylor’s handy with engines and is working hard to get them back on the road. Unfortunately, Maisie is getting annoyed at the amount of time he’s spending in the garage and confronts him. Instead of arguing back, though, Taylor comes up with an ingenious plan to keep Maisie quiet.

The Perfect Dom
Part of Mia’s nightwear is a pair of hotpants with SPANK ME emblazoned across the arse. Normally, that wouldn’t be a problem, but when she forgets that she has a houseguest and heads to the kitchen for a drink, she’s shocked to find Alex in her living room. Immediately spotting what he sees as an invitation written across Mia’s bottom, Alex makes an offer and Mia soon discovers that he is, in fact, the perfect dom.

Meet Me at the Spanish Steps
Darby is working at a holiday camp on the outskirts of Rome and is getting along just fine, with the exception of her sex life. For various reasons, she’s not getting what she wants in the bedroom, and her tastes are very particular. She turns to the Internet to get what she needs, and when she discovers William, it seems that he’s more than willing—and capable—of scratching that particular itch.

Coming soon to all other good eBook retailers.

“Spank me. Is that an invitation?”

Shit. Mia had completely forgotten about him. Her flatmate, Katy, had asked if it was okay if her brother could stay on their sofa for a couple of nights. His own place was being fitted with a new bathroom and conditions over there weren’t exactly tantamount to hygiene. Mia had been rushing around in order to get to work and hadn’t really been paying attention, so she’d just agreed and then promptly forgotten.

Now, however, she was being treated to a huge and incredibly embarrassing reminder. Katy was on a nightshift at the hospital so when Mia had woken up at 9p.m.—her own body clock being on that of working in the club, though tonight was her night off—she’d deemed it safe to wander to the kitchen to get a drink in what she was wearing.

Big mistake. Alex was sitting on the sofa, an eyebrow quirked and a leering grin on his face. He held his iPad, and earphones hung around his neck. He’d obviously been watching a film or playing some ridiculous game before Mia had flipped the light on and sauntered through the living room in nothing but a skimpy vest and hotpants. The hotpants were, of course, what he was referring to. The fuchsia garment had SPANK ME emblazoned across the ass in large black lettering.

Mia gave Alex a look that would have turned a lesser man to stone. He, however, simply grinned even more widely, then said, “Well? Do you need a firm hand to that luscious butt of yours? Like a spanking, do you?”

Mia sighed. “Shut up, Alex. It’s none of your business. I’m just getting a drink. Get back to your damn gadget and leave me alone.”

“Oooh, someone’s defensive. I’m just saying, you must have them for a reason. A statement like that printed on your backside would definitely be construed as an invitation in my book.”

“Well, maybe it is an invitation, Alex. But it’s certainly not directed at you. Now if you’d kindly stop passing judgement on my non-existent sex life I’ll get my drink and get out of your way.”