Not the Leader of the Pack 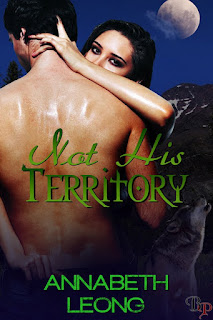 I'm thrilled to announce that my Breathless Press title, Not His Territory, is getting a sequel!

I love the world of that book, and am glad to revisit it. Not His Territory is a paranormal romance set in the Northwestern United States. There, the werewolves chafe under the strict control of the legalistic Werewolf Council. Though the Council claims to be protecting the interests and safety of werewolves, many feel it's trying to legislate the wolf right out of the members of the packs. Against this backdrop, primal urges boil over into romance, sex, and rebellion.

When Juli Gunby left Missoula, Montana, she didn't intend to come back. Not to her father, who became ill-tempered after being abandoned by his mate, and certainly not to Neil Statham, the pack beta who rejected Juli's girlish advances. But a trip to her father's deathbed threatens to become a permanent stay when the old man uses his dying breath to charge Juli with pack leadership. Juli wants to fulfill his last request but Neil, feeling betrayed that the responsibility isn't passed to him, threatens to lead the pack to revolt if Juli becomes alpha. Neil and Juli can't compromise, and the more they fight, the more their old feelings of attraction rise to the surface. It's clear they're going to tear each other apart eventually, but it remains to be seen whether they'll do it as rival alphas fighting for leadership or as lovers in the throes of passion.

For Not the Leader of the Pack, I sank into the world a lot more -- this book is about four times the length of Not His Territory. I can't wait to tell you more about it as release approaches (and I'm dying to see what delicious cover Breathless makes for this).
Posted by Annabeth Leong at 8:00 AM

Labels: Annabeth Leong, breathless press, my writing, Not His Territory, Not the Leader of the Pack, paranormal erotica, paranormal romance, werewolf romance