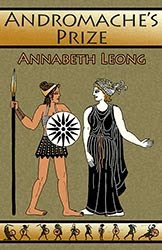 Friends, my publisher, Forbidden Fiction, has made my story, Andromache's Prize, free to read for a limited time. You can find it on their free erotica page, here.

When Briseis had belonged to noble Achilles, she had been better able to bear slavery. Now, though, the heroes had all sailed away home, leaving baser men to strip the carcass of Troy. Briseis had been given into the hands of cruel Calygdus, and nightly she suffered for his every shame and weakness. Until the night that Andromache and the women of Troy fell upon the Greek camp, slaying the men and releasing the women slaves, promising them freedom in the City of Women. Freedom, and love… (M/F, F/F)

This story includes hot, badass women, but be aware that it also contains dark content and descriptions of nonconsensual encounters.

While you're on the site, please consider checking out my short story collection, Liquid Longing. It includes plenty of dark erotica, often queer, and often mythologically based.
Posted by Annabeth Leong at 8:00 AM