Byrne is capable of blending a dizzying number of kink fantasy elements into powerfully hot stories with a strong sense of character. 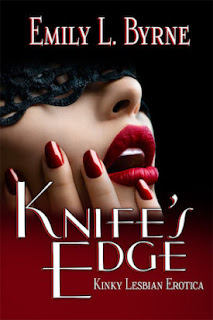 Emily Byrne’s kinky lesbian erotica collection opens hot and strong with “Reunion at St. Mary’s,” an absolutely scorching story that combines a dizzying number of fantasy elements in a group sex scene that keeps me gasping for pages on end. (Nuns, spanking, and the girls’ hockey team are somehow just the beginning of this fantasy.) I’ve read the story before, but that doesn’t diminish its power in the least. This particular fantasy could heat me up for many nights on end without abatement.

So while reading it, my main question was where Byrne could possibly go from there. I worried that this book couldn’t maintain this sort of pace, and wouldn’t be able to fulfill the promise of that first story. I was afraid the next eleven stories would seem pale in comparison to this particular filthy, kinky gem.

Byrne, however, is very wise with pacing and variety throughout the book. After “Reunion at St. Mary’s,” she showcases other strengths of her writing. “Arachne” in particular relies on gorgeous language, strong characterization, and a particularly creative mythological retelling to hold its own after the unrelenting heat of “Reunion.” Another story, “The Hands of a Princess,” appeals through humor and a strong plot—while still being quite kinky in its own right.

But, wonder of wonders, Byrne has more delicious group sex scenes up her sleeve. Knife’s Edge doles these out just when the reader has cooled off from the last one. As a result, they hit every time, and Byrne’s particular facility with this sort of scene makes each one feel fresh and sexy in its own way.

Knife’s Edge reads well from beginning to end, but for the reader who wants to know which group sex stories deserve special attention, check out “El Tigre” and “Cowgirls and Science” after you finish “Reunion.”

Part of what held my attention throughout Knife’s Edge was that, between the hot sex scenes, there’s a lot of intriguing character and worldbuilding. More stories than I expected have speculative elements. I particularly enjoyed the lesbian vampires of “El Tigre,” which were a fresh take on a heavily played trope, and the warrior women of “The Hands of a Princess.” (Note to Emily Byrne: I could read a whole book set in that world. In particular, I’d love to know what Eriel gets up to in her spare time… Just saying.)

The back half of Knife’s Edge consists of stories set in the contemporary world. Instead of building new worlds and settings, Byrne opts for deep explorations of the psychology behind her main characters. Particular standouts include “D is for Denial” and “Polar Vortex.” “D is for Denial” explores the sexiness of the buildup between two characters and the power rush of not giving a love interest what they clearly want—while also speaking in a moving way about the fears that can drive a game like that as well. “Polar Vortex” is a poignant scene between two lovers who seem on the verge of a split, and raises the question of whether a powerful moment of trust and intimacy can turn a relationship around.

I tensed up while reading a couple of stories—”Planet 10” and “Lovely Rita, Meter Maid.” In both cases, the story is very concerned with a fetish in a way that I felt had the potential to be dehumanizing. For example, in “Planet 10,” the main character really wants to have sex with a member of a particular alien race, which for me resonated uncomfortably with my lived experience of lovers fetishizing elements of my racial heritage. Byrne, however, seems aware of the situation. In both stories, the object of desire asks at one point why the main character is interested in her specifically, and the main character is forced to recognize the insult implicit in this sort of nonspecific desire. “Planet 10” ultimately gives a science fictional explanation for why sex would happen anyway (and extracts a high price from the main character). “Lovely Rita” handles this with a complementary fetish. By the end of both stories, I was mollified, though I couldn’t really relax enough to be turned on.

Knife’s Edge contains a few weaker entries. While I was very excited about the setting and circumstances of “On the Spanish Main” (boats!), the character development in that story felt thin. “An Incident in Whitechapel” is historically rich, very sexy, and full of fascinating psychology and obsession, but in the end felt a bit obscure to me (basically, I couldn’t understand the conclusion). However, I wouldn’t let a bit of unrealized potential deny me a book full of sexy, fascinating goodness.

Overall, this book is a powerhouse, packed with heat and plenty to keep you entertained—and also some moments of deep feeling and insight.

You can pick up Knife's Edge at the publisher's website here, on Amazon, and elsewhere.

(I won a copy of Knife's Edge in a giveaway.)