The Mark and the Caul: A Sexy Part 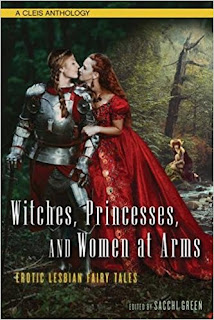 The princess, Lucinda, has been told all her life that she's disfigured, and it takes her a while to trust her lover, Sam, with her body. I always find tentative explorations hot, and I also really enjoyed writing about how Lucinda and Sam navigate Lucinda's insecurities. Here's one of their early sex scenes:

"May I touch you?" Lucinda asked.

"You may do with me as you please."

Lucinda stepped close. At first, despite her question, she touched only with eyes, her fingers too timid to bridge the gap between them. When she lifted a hand at last, she flitted it around Sam's body like a butterfly too skittish to alight. Feeling ridiculous, she brought a fingertip to rest on the blunt tip of Sam's broad nose.

They both froze, and then Sam laughed, and the sound freed Lucinda to gather her wife into her arms more boldly. She learned the shapes of Sam's shoulder blades, the curve of her spine, and the solidity of her hips. She tucked Sam's muscular buttocks into the palms of her hands, but the powerful response in her body alarmed her and she retreated to Sam's elbows. Lucinda, however, could not resist stroking upward from there, outlining her wife's upper arms, which were strong and thick from helping the miller.

This supposedly less intimate territory still made Lucinda's stomach flutter. She rested the side of her face between Sam's breasts, barely trusting her legs to hold her up. Wrapping one arm around Sam's back, Lucinda allowed her other hand to wander to the hollow of Sam's throat, over the point of one taut breast, along the side of her rib cage, and finally, between her legs.

"Moon above and river below," Sam cursed.

Lucinda smiled at the reaction and petted the damp hair that grew over Sam's pubis. She knew the pleasure her own body yielded when she explored this place. "There is a river below indeed. I feel the signs of its presence, though I have not found it yet."

Sam widened her stance. "You seem clever enough to track it."

"You will not be able to remain standing under the force of its waters once I make them flow," Lucinda said. She led her wife to her bed and helped her in. Then she rubbed the top of one of Sam's thighs, as if she were a great mill horse in need of steadying. Slowly, Lucinda parted her wife's lower lips, revealing the extent of her wetness.

"I've found the path that leads there." Lucinda began a thorough examination of the territory, at first simply stroking and discovering, then later responding to the hiss of Sam's breath and the catches in her throat. She trapped sensitive flesh between her first two fingers, squeezing lightly, tugging, and rolling.

Sam gave a full-throated cry, and her firm body became rigid and hard beneath Lucinda's touch. Pleasure shattered off her and pounded through the room, rolling from Sam's body in waves that Lucinda could feel at her temples. Sam gasped, and finally caught her breath. "My mother told me the pleasures of the marriage bed were not for women," she said at last. "I've never known her to be wrong before, and yet I can imagine nothing sweeter than what you have done to me."

Lucinda stretched out beside Sam, still in her clothes. She slipped her hand beneath her veil so she could inhale Sam's scent, and shivered all over at the spice of it. "It heartens me to hear this from you. I was always told that it would hurt."

"Will you let me please you, too?"

Lucinda drew a deep breath. "Soon," she promised. "But not yet."

Sam nodded and held her, and the two women whispered secrets to each other.


If you'd like to read the rest, you can pick up the book here.
Posted by Annabeth Leong at 8:00 AM