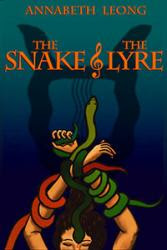 Here's the first scene from my story, The Snake and the Lyre, which is now available at Forbidden Fiction:

Eurydice rested her cheek against Orpheus’s thigh. His rich voice tingled in her ears, its timbre sweet as a persimmon. His foot tapped slowly as he plucked his lyre, rocking Eurydice’s head with the ancient rhythm of the ocean.

The strings of the lyre—they trembled and thrilled beneath his fingertips. They exulted and crooned. Eurydice would have responded just that way had he thought to draw his music from her body rather than the instrument.

She didn’t mind the rocks on the hill where they sat, and yet she recrossed her ankles under her body, fidgeting. Her heel pressed between her legs, sinking slightly into her cunt. Safely hidden by her skirt, Eurydice rocked on it in time with Orpheus’s song.

She closed her eyes and pretended that the notes slipping into the wind around them were his hands slipping into her clothes. Her inner thighs shivered. His tongue could leave wet trails there. He could find his way to the juncture of her legs and sing only to her, his full lips and white teeth forming private poetry. Eurydice imagined his eyes, the shade of grapes in the vineyard, gazing up along her belly and between the peaks of her breasts. She would grip hunks of his black hair and pull his face tight to her. She would lock her ankles at the base of his spine and refuse to let go until she tired of finding release against his beautiful mouth.

“My love?” Orpheus’s song had ended. He stroked her hair—too gently. “Eurydice, my love? What did you think of that Hypophrygian setting? I might compose in that mode for our wedding. It speaks so delicately, expressing the yearning of youth joined with the peaceable accord of family life.”

Eurydice made the effort to smile. She kissed the top of his thigh through his tunic. “Your music would make the gods ache. It will be lovely.” She inhaled his sharp, male scent, lifted from his body by the heat of the day. She pressed her lips to his leg again, a little higher up.

Orpheus frowned, adjusting his grip on his lyre. “The Lydian mode might be more traditionally appropriate. Simple happiness—that’s a good atmosphere for a wedding.” He scratched absently behind Eurydice’s ear. “I think I can transpose this, so you can hear them one after the other.”

She sighed and touched his ankle, just above the strap of his sandal. She angled her body to emphasize the swell of her breasts and lifted her eyes to his through the veil of her curling dark hair. “Orpheus...”

“Perhaps you could lay aside the lyre for a little while?” Eurydice moved her hand up past the hem of his tunic. The muscles of his thigh twitched as she approached his cock.

Orpheus’s indulgent smile dashed her hopes against the rocks of his perfect cheekbones. He retrieved her hand from beneath his clothes and returned it to her. “The wedding will come before you know it, my dear. We’ll spend all night making love and singing to the stars.”

Eurydice folded her hands in her lap, unable to resist pressing them against her crotch. “Of course,” she said. “You want to try the Lydian mode, you said?”

I should warn that it gets a whole lot darker from here. You can pick up the book to read the rest here.
Posted by Annabeth Leong at 8:00 PM

Labels: Annabeth Leong, excerpt, Forbidden Fiction, my writing, The Snake and the Lyre