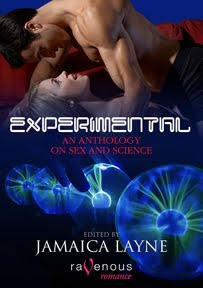 Today I am remembering the first time I typed the word "clit" into a story. It was an experiment -- a thrilling and dangerous one. I wanted to know what kind of story I most wanted to write, and had made a promise to myself -- I would allow myself the freedom to write what I wanted for a year, without worrying about the future or whether I could publish it, or any of that.

The seminal moment came with a story called "Robot Lovers Prey on the Lonely." The title came to me first, and I had a vivid sense of the first scene. Quickly, it became clear that to tell the story right, I had to write about sex explicitly -- not just behind a closed door. For this story, I needed explicit sex to have proper characterization. Pulling back from that would have meant betraying the story.

I typed "nipple." Then a while later, I typed "clit." I felt good about the sex scenes as I wrote them -- they felt expressive and clear.

But pretty soon, horror hit me. What was I doing? This was a good story. By adding all this sex, I was dooming its chances. I would never be able to sell it anywhere respectable. If I could publish it, it would be caught in a ghetto somewhere. No one would read it.

I had to finish the story -- it was one of those special cases in which I truly felt compelled. But I was afraid of the implications of what I had done and the line I had crossed.

It amazes me to think of how frightened I was when I wrote those first "forbidden" words. I'd love to grab my younger self by the shoulder, give her a kiss on the cheek, and say, "Baby, you ain't seen nothing yet."
Posted by Annabeth Leong at 8:00 PM