In the Death of Winter Released! 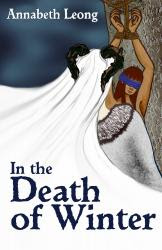 My story, In the Death of Winter, released today at Forbidden Fiction.

As a young woman hangs bound in desperate, hopeful sacrifice, an aged priestess of the dead god of winter recalls the night he made her his, with his power and his cold passion. (F/F, M/F)

“Will you send me away if he does not come?” Sarant pressed.

Bolormaa sighed. “Child, he will not come. He is dead.”

She uncoiled a rough length of hemp and bound Sarant’s wrists with it. The god would have liked this one. The cuts that had covered Sarant’s body when Bolormaa found her had nearly healed. Most village men would reject the girl as hopelessly disfigured, but Erlik favored signs of inner strength.

Bolormaa’s bones creaked when she hoisted Sarant’s hands above her head and fastened them to the branch of a great larch tree. The young woman’s nipples had already grown hard. Sarant panted with excitement, and the smell of her arousal stung the old woman’s nostrils.

“Why are we doing this if we know he will not come?”

Bolormaa tugged and tightened the ropes, grunting. “Because I am an old fool, and I cannot give up hope that he might.”

I'll post a more substantial, sexier excerpt in the future. For now, you can check out the book here.
Posted by Annabeth Leong at 1:10 PM