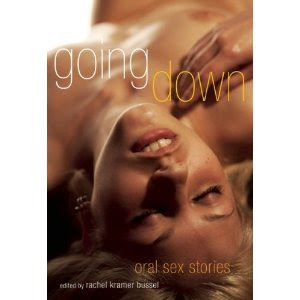 I just received my contributor copies for Rachel Kramer Bussel's Going Down: Oral Sex Stories, and the book looks hot!

The book has quite a range, and I'm pleased to say my story, "Getting Something Out of It," is called out in the introduction. I've posted some relevant excerpts of the intro below, but the full text is available at the book's website here.

I thought I knew, if not everything, quite a bit about the fine art of oral sex until I started to read the stories that came in for Going Down. In them, giving and receiving head became its own, if you’ll pardon the pun, head trip, and showed me that there is plenty for even the most seasoned connoisseur to learn and enjoy about an act that brings pleasure to so many.

The intimacy of climbing between someone else’s legs, of discovering what happens when you peel them open and utterly expose them, leaving them aching, trembling, willing to do anything to have you keep going, is a theme that is repeated here. Lovers get off on the thrill of being in command, in control, giving and taking joy in ways that leave the other person breathless. “There’s no rush of power quite like it in the world, that knowledge that you can make another person come, can release her desire and expose her most secret and vulnerable parts. That’s my favorite part of sex,” writes Mary Borsellino in “Blush.”

For some of these characters, oral sex leads them into new territory that brings revelations about much more than sex: Paige in “Getting Something Out of It,” by Annabeth Leong, lets go of the memory of a selfish lover and finds that when she takes control and owns what she’s doing when she goes down with a new lover, the act is special for both of them. Characters facing gender transitions, and their lovers, discover what remains and what is gloriously new about this most personal of changes.

When I wrote "Getting Something Out of It," I was thinking a lot about my insecurities and needs around sex. I admit I'm sometimes motivated by wanting to wow my partner, but I'm not sure how good that is for anyone involved. I was really pleased to see the editor responded to those themes.

I'll post an excerpt of the story, too, in the coming days.

Don't forget to check out the book -- it's available in both print and e-book editions.
Posted by Annabeth Leong at 8:00 PM