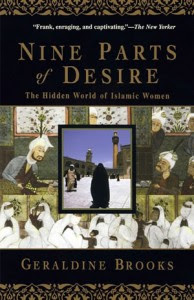 I recently read Geraldine Brooks' Nine Parts of Desire: The Hidden World of Islamic Women, and would highly recommend the book to anyone interested in sex, women, religion, and the intersection of the three.

The book contains deep discussion of the veil, clitoridectomy, seclusion, honor killings, child brides, female soldiers, and similar subjects of vital interest. I really appreciated the effort Brooks makes to place these issues in historical, political, and cultural context. Particularly, she often relates practices to stories of the wives of the Prophet Muhammad.

These are complex issues, and Brooks allows them to exist as a tapestry. Rather than giving easy answers, she lets things lie side by side, illustrating a sort of confusion that increased my trust in the book's authenticity.

The title of the book is drawn from a proverb that suggest God made sexual desire in ten parts, gave one to man and the other nine to women. This is great for the title because it sums up a lot of what's so fascinating about the position of Islamic women. On one hand, this idea is refreshing. As a Western woman, I'm all too used to being shamed for having sexual desire, or finding that people are surprised when I express it. A lot of the Islamic ideas Brooks explores embrace the reality of female sexuality in a way that I can appreciate. However (and this is a big however), another element that comes out clearly is deep male fear of female sexuality. Women are shown held hostage, constrained, and mutilated because of the extent of this fear. This is not unique to Islam -- there's plenty of the same fear in the West. But some practices really do seem more extreme in their social acceptability (honor killing does horrify me more than the perhaps comparable "crimes of passion" one might see in the West).

The book was originally written in 1995. While that means that some of the information, such as the chapter on Queen Noor, is out of date, I actually found that refreshing. I can't describe how nice it was to read a book that really engaged with Islam without the heavy and pervasive influence of 9/11. While that was certainly a significant event, I think it tends to color Western descriptions of Islamic nations and practices to the point that it's hard to achieve balance. Brooks isn't afraid to criticize, but she also works hard to empathize with the women she writes about and provide a sense of their perspective.

But I was perhaps struck the most by Brooks' introduction, in which she tells the story of how she came to interview women in the Middle East. She began as a correspondent frustrated and marginalized because the people she saw as important (the men) would not grant her access to them. She spun her wheels for quite some time before realizing she could get stories from the women that no male reporter could. I think it really says something that it took a female reporter so long to figure that out. It's easy to criticize the Islamic world for marginalizing women, but while those of us in the West are much more free to go where we please, I think we still carry the view that women and women's issues are less important. Nine Parts of Desire can be read as a refutation of that position, and in that sense, its message is powerful and not outdated in the least.
Posted by Annabeth Leong at 8:00 PM