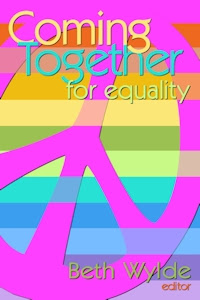 This weekend, Coming Together: For Equality released, edited by the fabulous Beth Wylde. Like all of Coming Together's books, it supports a good cause—in this case, Planting Peace—Equality House. Every story is also written to an anti-bullying theme.

This book is so hot and so important, people. I talk often about how erotica saved my life, and this is a great example. Erotica is how I've claimed who I am, how I've come to terms with myself in a true, brave way, and many of these stories are on a similar theme.

My story is called "Risk Rider and Dare Take the Con," and as I was working on it I realized how much I needed to write it.

I've been a geek girl all my life, and I've dealt with a lot of nonsense from other geeks. For all that the geek community prides itself on being accepting, I've found that this often translates to expecting everyone to put up with bad behavior from jerks (who are excused with whispered explanations about how "he's just socially awkward"). In the past year or so, there's been a lot of discussion of harassment at cons, and that's the thing that came to mind when I saw the call for Coming Together: For Equality. I'm not a cosplayer—I'm afraid I don't have the skills—but I have borrowed friends' costumes a few times and I admire the work and devotion that cosplayers put in.

When Jamie-Lyn complained about convention harassment with her friends at home, they could never understand why she put herself through it at all. She'd struggled to explain herself, trying to describe how good it felt to wear a costume so well-made that she could believe she actually was the motorcycle-riding hero of her dreams, how it changed the way she walked and talked and felt about herself. She was funnier when she dressed as Risk Rider, she told her friends, because she adopted the character's sardonic humor. She didn't take shit from people—after all, she'd actually shoved that guy just now, instead of looking down and skulking away the way Jamie-Lyn at home would have done. And she did feel sexy, though that didn't mean she wanted to be harassed by every single douchebag at the con.

That last part usually made friends wrinkle their brows in concern. Some people tried to gently inform her that dressing in full-body leather and going out in public might sort of be seen as inviting attention from the douchebags. If she didn't want the attention, why did she wear the costume?

Jamie-Lyn couldn't hold back a little growl of anger. She shrugged off Risk Rider's motorcycle jacket, embellished with exuberant streaks of blood-red stars, and folded it over one arm. She would go back to her room, change into jeans and a con T-shirt, and try to enjoy the event by blending into the crowd for once. She would do this and it would be a relief, and the tears currently threatening to pour down her cheeks were not telling her otherwise. They were not.

"I dare you to dress like a girl," someone said from a few feet away, using that taunting, scornful voice that had become all too familiar. In the mood she was in, she wanted to just keep walking to the elevator bank as quickly as possible, but something about the way the sentence was delivered made her pause. The guy speaking had emphasized the word "dare," almost as if...

Jamie-Lyn looked up, and sure enough the jerk was in the process of tormenting a cosplayer dressed as Dare, Risk Rider's wife and crime-fighting partner. The first thing Jamie-Lyn noticed was how nicely the leather was stitched. A home sewing machine could handle light leather, but not always well, and this costume showed none of the telltale bunching that appeared when a machine too weak for the job began to seize up. The person who made this costume either had an industrial machine or the patience of a saint. Also, this was Jamie-Lyn's favorite version of Dare, replicating the costume the heroine wore after a redesign intended to make her look more realistically badass. It was tight and tailored, but would actually provide protection if Dare fell off her bike.

The cosplayer was a man, and Jamie-Lyn felt a little respect rise in her chest. Female cosplayers took all kinds of nonsense for daring to go around dressed up in public, and the only people who had to deal with as much crap—and sometimes even more—were men who dared to put on female characters' costumes non-ironically. She wanted to talk to this guy, maybe trade leather-working tips, and maybe even take a picture together. Jamie-Lyn had been photographed a few times at cons standing next to a Dare, but she liked the symmetry she'd get next to a man in a Dare costume.

Also, this man looked good. He was slim enough that Dare's skintight leather pants looked great hugging his ass and thighs. Big, dark eyes, high cheekbones, and a chin that came to a sharp point made for a slightly feminine face that made Jamie-Lyn think all the more about how its owner was a man. He wore Dare's leathers exactly the way that Jamie-Lyn had always imagined the heroine would—with a lot of energy, a little sass, and just the right amount of negligence. Dare was a tech expert as well as a biker, and often went out still half-involved in her latest project. This guy had left his hair uncombed and wore a soldering iron strapped to his waist. It was a great effort, and Jamie-Lyn couldn't wait to introduce herself.

She took a step closer, then frowned when she remembered what had drawn her attention in the first place. The guy harassing Dare hadn't backed off, and in fact, judging by the way he glanced around for support, he was in the process of showing off for a group of his friends. The bully noticed Jamie-Lyn approaching, and an ugly smile spread over his face.

"I see your husband's coming to pick you up, little girl." The guy got in Dare's face and shoved him once in the chest, hard enough to make the costumed man step back. The cosplayer's hands fisted at his sides, and Jamie-Lyn got the idea that he knew how to defend himself if pushed too far. Still, she didn't want him to feel as alone as she had all morning.

Jamie-Lyn sighed. This attacker got points for actually knowing the comic, then lost them all for being a towering jerk.

The guy also seemed to think that all he had to do to win the insult game was say the word "girl" repeatedly. Jamie-Lyn steeled herself for confrontation and went to stand beside Dare. "Our friend already went to get con security," she told the guy in a low voice. "How about you leave us alone? They've got a zero-tolerance policy here, and you'll forfeit your admission fee." She hoped the guy didn't call her bluff. The con security volunteers she'd met so far were well-meaning but overworked. They did their best to enforce policies, but there weren't enough of them. Jamie-Lyn had yet to encounter one that day, despite the many harassers she'd found instead.

The attacker muttered something, and Jamie-Lyn held her breath, uncertain of which way this situation would go. Then someone else walked up to them, and Jamie-Lyn dared to hope that for once this would be a decent person. "Risk Rider and Dare! You guys look awesome!"

You can read the rest of the story in Coming Together: For Equality and support a great cause in the process.
Posted by Annabeth Leong at 8:00 AM