I remember when Lucy Felthouse's Sweet Spot was originally released, as part of the same series that inspired my book, Heated Leather Lover. I'm happy to see it released again. It's a fun story! :D So, I thought I'd share the details. 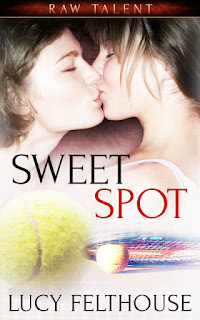 Virginia Miller is an up-and-coming tennis star. She’s gone from a ratty tennis court in a park in south London, England, to the world’s top training facility—Los Carlos Tennis Academy in California. In awe of the talent around her, Virginia is all the more determined to make the most of the opportunity and show that she’s worthy of her place there. Her mentor, Nadia Gorlando, has every faith in her.

But Virginia finds herself distracted—Nadia, as well as being a top-notch tennis player, is seriously sexy, and Virginia’s mind keeps wandering where it shouldn’t. Will her crush get in the way of her career, or can she find a way to push the other woman out of her mind before it’s too late?

Please note: This is a re-released title with a new cover—the book content hasn’t changed.

Nadia Gorlando and I had just gotten off the exercise bikes in the gym when one of the academy’s coaches, Peter Ross, headed over to us, all smiles.

“Hey, Nadia,” he said, his all-American grin widening and his blond hair flopping down over his forehead, “I need a huge favor.”

I flicked my gaze to Nadia. She raised one of her perfectly shaped eyebrows and waited for him to continue. He did.

“I totally lost track of time just now and I have an appointment with Travis Connolly. Would you mind wiping down my machine for me? Or maybe stick a note on it saying it’s out of order? I don’t want to leave it all sweaty for someone else. You’ll be doing me a real solid. I’ll owe you.”

My jaw almost hit the floor.

Now Nadia rolled her eyes, looked over at the offending machine, then back at Peter. “Sure, I understand,” she said, as cool as ice. “The world’s number one can’t wait. Go right ahead—I’ll fix it for you.”

He babbled a load of thanks, then jogged out of the gym.

Nadia chuckled. “Of course not. He may be coaching Travis Connolly and Rufus Lampani for the US Open, but that doesn’t mean I’m going to clean up his mess.” She pointed with her chin over to the machine Peter had just vacated. “Come on, V, I’ll show you how I’m going to deal with this.”

I followed her, grinning. Her tone told me that it was going to be something fun. Well, for us, anyway. Probably not for Peter.

Sure enough, when she returned from the room off the side of the gym, she had a pad of paper and a pen in her hands. Deliberately shielding the pad from my view, she wrote something down, then pulled off the top sheet. Folding it, she then propped it on the sweat-slicked seat so the writing was on view to anyone who happened past.

When I’d read and absorbed the words, I turned to Nadia, impressed. Her smile lit up her face, showing dimples in each cheek, and her brown eyes gleamed with amusement.

It was in that moment that I decided I had the serious hots for Nadia Gorlando.

Posted by Annabeth Leong at 2:49 PM