For the Love of a Soldier 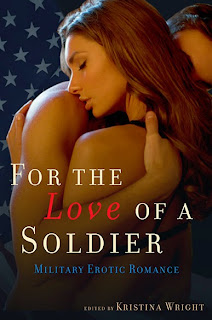 I really enjoy military erotic romance—it hits on hot themes like honor, duty, loyalty, and muscle—but having grown up the daughter of a Vietnam War veteran and having many friends who went on to serve, what I particularly appreciate are nuanced approaches. I love deep explorations of the difficult questions of war—and I'd be uncomfortable with simple fetishization of people in uniform. I know which one of those we're going to get from Kristina, however—her previous military anthology, Duty and Desire, blew me away in terms of both emotional depth and hotness (see how floored I was by Shanna Germain's story, "Shattered").

That's a preface for explaining why I particularly care about my story in For the Love of a Soldier, called "True North." I wrote it in honor of my father (on the anniversary of his death, in fact). Weird to say for erotica, perhaps, but true nonetheless. My father's identity as a veteran was so complicated for me. I saw that he'd been shattered by the war in Vietnam—injured, both physically and emotionally, he was never quite able to return to society. On the other hand, I saw his pride in what he'd accomplished as a soldier, and I saw that it was the military that cared for him toward the end of his life. He shopped at the PX, went to the VA hospital, and was buried in a National Cemetery because I couldn't afford anything else when he died. The main character of "True North" is slightly autobiographical in that she's dealing with the death of her father and similar mixed feelings, because I really wanted to write about that paradox. At my father's funeral, I was struck by the sincerity of the attending soldiers' ability to honor a man they didn't know—another thing I describe in "True North." The romance that ensues with one of those soldiers is the fictional part of the story, but I hope it conveys the deep respect I have for those struggling with the paradoxes of serving one's country and those facing down the difficulties of war with the strength of character required to do so.

Here's the table of contents for the anthology, which is slated to be out in November:

For the Love of a Solider: Military Erotic Romance
Table of Contents
Introduction: Love in Uniform
Penelope Pending by Axa Lee
Drifting Toward You by Kathleen Tudor
Duty by Cat Johnson
True North by Annabeth Leong
Home for Supper by Geonn Cannon
For the Love of George by Victoria Blisse
Blame it on the Dog by Andrea Dale
Special Love by Sidney Bristol
Stones by Tahira Iqbal
Lexie’s Arrow by Martha Davis
Jersey Boy by Tina Simmons
Failure to Launch by Lucy Felthouse
The Aid Station, 1916 by Victoria Janssen
Fair Game by Lynn Townsend
Lucky Charm by Lea Griffith
Long Time Coming by Kristina Wright

Preorder button should be up on Amazon by the end of the month!
Posted by Annabeth Leong at 8:18 AM