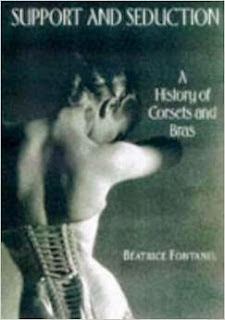 I've been reading a book about the history of clothing for women's breasts, and it's a fascinating read but I find myself constantly stopping to ponder the assumptions and implications the book contains. In a section describing Cretan women (who left their breasts bare but wore corsetry that pushed them up and out), there is a sequence of weird and sexist assumptions. The first couple are quotes from male historians from the early twentieth century, so I wasn't terribly surprised. Then the author weighs in with the following:


In fact, Cretan women were far from being sexual objects and played a primary role in society. They participated fully with men in the capture of bulls and the running of nautical expeditions. More significantly, it was they who formed the caste of bare-breasted priestesses who officiated at the rites of the female divinities worshiped by the society as a whole. But more important still, as the Greek historian Nicolas Platon informs us, Minoan civilization was the first to aestheticize adornment and give it the status of an art form, on a par with painting and sculpture.

-- from Support and Seduction: A History of Corsets and Bras, by Béatrice Fontanel

2) More significantly than that, they were in charge of worship of divinities.

3) More important still (apparently more significant than political or religious equality for women), the Minoans were the first to aestheticize adornment.

I'm not one to argue against the significance of fashion, but this pulled me up short. One could discuss whether religious or secular power deserves top billing, but I'm pretty sure both trump the "aestheticization of adornment." Maybe the argument is that fashion endures but equality for women does not? A sad thought.

I do like the idea of a society that can handle women going around bare-breasted. I want to read more about the Cretans.
Posted by Annabeth Leong at 8:00 AM