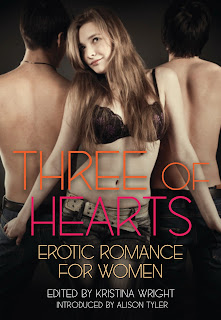 News catchup again. Someday I may manage to get all this stuff posted!

That picture above is for Kristina Wright's anthology, Three of Hearts, which is coming in October. My story is "Whose Anniversary Is It Anyway?"

I've had a few three-way relationships in my life (I said it that way to contrast with threesomes, which in my experience are different beasts). I'll be honest—they were a tricky balancing act. I was young, and I didn't know my way around the landscape. I didn't even know the word polyamory, and I'd never read anything like Tristan Taormino's fantastic book Opening Up (a book I would highly recommend for anyone who wants to consider nonmonogamy in its various permutations). So to write an erotic romance about a relationship involving three people and be honest, I didn't want to create a story that was entirely fantasy. I went for something I knew to have been an issue in my own experience—what happens when the love feels unequal and/or someone is feeling left out. The story's about that discomfort of unevenness, and particularly about the question of which significant dates should be celebrated, and how. Because, in my experience, anniversaries can cause a lot of conflict even for couples. They raise tons of expectations about romance and making a day "special." That issue can get even trickier with more than two people involved. Now, the characters in my story probably have read Opening Up and things like it, and they're a lot more mature than I was the last time this sort of thing came up for me, and they come up with a sexy way to work out their issues—so basically, they're well-equipped to have fun with this.

Three of Hearts
Table of Contents

Foreword Alison Tyler
Introduction: Three’s the Charm
Movie Night by Tiffany Reisz
An Extra Pair of Eyes by Rachel Kramer Bussel
Eve’s Apple Red by Angela Capteron
Experience and Expectations by Kathleen Tudor
The Mistress in the Brat by Skylar Kade
What Happens in Denver by Cheyenne Blue
Old Habits by Mina Murray
Medley of Desire by A.J. Lyle
A Thief in the Night by Giselle Renarde
Drinking Games with Cowboys by Axa Lee
The Last Day of Summer by Veronica Wilde
Full Circle by Jade Melisande
Whose Anniversary Is It Anyway? by Annabeth Leong
Limits of Endurance by Ariel Graham
Uncharted Seas by Chris Komodo
Three for the Road by Kristina Wright
Posted by Annabeth Leong at 8:00 AM