And yet another forthcoming story:

"Loyalty," coming soon in The Honey Trap: Sexy, Seductive Spies from Sizzler Editions:
A corporate spy trapped by years of debt servitude dons a synthsuit to seduce information out of Stella Swansea, the CEO of a prominent designer drug company. Unfortunately, the dossier she used to prep for the job failed to mention Stella's history with the man she's impersonating, and no outsider knows the true secret of the drugs her company sells.

I'll post more about this forthcoming gender-bending SF story as it becomes available.
Posted by Annabeth Leong at 8:00 PM No comments:

The inestimable Sommer Marsden is editing the latest anthology from Coming Together, and it'll be hot and good for the braaaaiiin. That's right, Hungry For Love is a charity anthology of zombie erotica (set to benefit the American Diabetes Association), and I've got a story in it!

"Screen Siren" is a zombie romance set in Hollywood. The main character, Sam, has patched together a career as a second-rate director, using resources real directors wouldn't touch. This includes zombie actors. When the woman of Sam's dreams shows up undead, he has to live by the one rule he's learned in his punishing film career: You can't have what you want, so you have to take what you can get.

Keep an eye out for this and the rest of Ms. Marsden's chosen stories -- Hungry For Love is set to release on Halloween.

Thank you!
Posted by Annabeth Leong at 8:00 PM No comments:

"Beginnerʻs Luck" is a story about a woman out to take control of her sex life. Rachel has always been a rope bottom, but the delicious Jeremy tempts her to make a special exception and try acting as a top. Once she starts, Rachel canʻt stop -- she displays Jeremy in an effort to catch the attention of a statuesque blonde across the room.

Bound and Bonded isnʻt out yet, but if you canʻt wait, I highly recommend you check out the other collections Mischief has published. You can browse them here. As a tip for U.S. readers, U.S. editions of Mischief Books can be had from Kobo, and you can read them using Adobe Digital Editions, which is free to download.
Posted by Annabeth Leong at 8:00 PM No comments:

Freedom For A Small Part 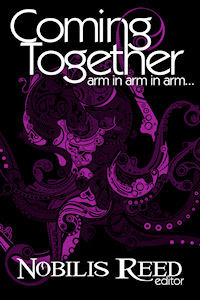 Nobilis Reed is a man concerned with story, and I have high expectations for this anthology -- Iʻm sure it will deliver as much in terms of plot and character development as it does in orgasmic prose.

To whet your appetite, hereʻs an excerpt from my story. The heroine, Natalie, is living in a dorm known for the tentacle monster that lives in its plumbing. This scene takes place after an attempted hazing that teaches Natalie that the creature might not be all it seems.:

A few times, she started conversations with other girls in Wesley, trying to figure out what they did with it. For all the innuendo about the creature, no one seemed willing to talk specifics. Donna, for example, a tall, slim volleyball playing blonde who lived down the hall, rolled her eyes when Natalie raised the subject. "I think you know what we do with it."

"I mean, what specifically?" Natalie pressed.

Donna shrugged. "It grabs you and fucks you. You know that."

Natalie had trouble believing no other girl had discovered how responsive the tentacles could be. She waited in a bathroom stall late one night, hoping to get a chance to watch how someone else interacted with the creature.

She didn't have to wait too long. Cora came in, stripping off her clothes as soon as she passed through the door and heading straight for the showers. Natalie waited until the water started, then stepped out of the stall as quietly as she could. The school always skimped on shower curtains, probably in an effort to save money, so Natalie had an easy view of the redhead almost to the knee. A clutch of tentacles wound around her calves, and Cora gripped them with red-manicured hands, urging them up.

"Come on," she muttered. "Don't get sluggish on me now. You were never shy before." She hauled the tentacles higher up her body, squeezing them so hard that bloodless patches spread out from around her grip.

Holding her breath, Natalie lowered herself to the floor, working soundlessly to find an angle where she could get a better view of Cora's shower. She crawled on her belly until she was just outside the shower stall, hoping Cora would be too occupied with the tentacles to notice her there.

Natalie peered up. The redhead stood, legs wide, tentacles wrapped around all four limbs. Many more had come up for Cora than ever had for Natalie. They crammed through the shower drain in what looked to be a painful squeeze. Cora tugged them upward almost maniacally, guiding them around her waist, her upper thighs, and her bare breasts. She squeezed them hard and they squeezed her back, but she didn't seem satisfied. Cora wrung one tentacle with both hands, and the creature responded by tightening all around her. Her nipples stood out as her breasts protruded and reddened.

Cora sighed and rocked within its hold. Natalie noted the rocking, wondering if that effectively signaled the creature to perform a different action. Whatever the impetus, a tentacle unwound from Cora's thigh and probed her slit. Natalie blushed and wanted to look away, but she reminded herself of her scientific curiosity and kept her gaze fixed on the redhead.

Tentacles peeled loose from her waist and arms and joined their fellows at Cora's entrance. The girl rocked harder and faster, the muscles of her thighs straining to spread as wide as possible. Four thick tentacles, studded with fleshy knobs, charged into her cunt, and Cora threw back her head in ecstasy, her mouth open in a cry that was choked off by another tentacle pressing between her lips. Powerful rings of muscles contracted rhythmically to power the appendages that worked within Cora.
Natalie watched wide-eyed as Cora and the creature played out every move in an incredibly complex symphony of violation. If her training theory was true, the nuance of the creature's behavior with Cora seemed an incredible feat.

Not wanting to press her luck, Natalie retreated as rapidly as she dared. Only later, when she returned to her room to make her notes, did she realize how aroused she'd been by Cora's display. Furtively, Natalie slipped one finger into her panties. She drew it out covered with juices. For a moment, she wanted to lie in her bed and linger on the image of the creature with Cora, to rub herself until she shuddered in ecstatic oblivion the way Cora had.

She resisted the urge. Pleasure was for Cora and the others. Natalie wanted answers.

To read the rest of this, along with the other stories in the anthology, you can get the book here!

Posted by Annabeth Leong at 6:44 PM No comments:

Watch for more information as it becomes available!
Posted by Annabeth Leong at 8:00 PM No comments: 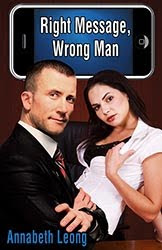 
Lila texted a come-on to her sometimes hook-up Jason, but instead it wound up going to her boss, Jaron. Afraid to upset her sadistic superior, Lila follows through when he responds with excitement, only to discover that Jaron knows how to hurt her in exactly the way that she needs. (M/F)

The sensible thing to do would be to explain my mistake and hope we could both move on from the embarrassment. But what then? He’d just confirmed his interest and sent a lewd text back to me. I’d seen how Jaron reacted when he thought he’d been hung out to dry. Hell, he got mad the time I asked if he wanted coffee and then forgot to go out and get it. How much worse would it be if I offered him a blow job and then made him feel like a fool?

Wishing I could throw the phone, I looked at his texts again. Nothing could possibly be a suitable response to his line about his cock and my mouth and the alley out back—especially not after my line about wanting to get his big cock down my throat. I tried one last message. Yes, I typed. I can be there in 45. My heart pounded as my finger hovered over the send key.

I tried to talk myself out of it. Was giving my boss a blow job in an alley really less humiliating than explaining my stupid texting mistake? The boss who made me miserable every single day at work with his unreasonable demands and total lack of empathy? I pictured his unsympathetic, ex-marine face, his hands like iron around the back of my head, his cock driving down my throat harder than I’d ever had it. But the image wasn’t unappealing—on the contrary. I couldn’t imagine Jaron accepting anything less than a full deep throat, and the idea was about to make my panties melt. I really did need someone to make me forget all my stress.

The real question, I decided, was whether blowing my boss would be less humiliating than accepting yet another sympathy fuck from a guy who rejected me afresh every time I saw him. And actually, it seemed like it was. The idea of Jaron seemed hotter by the minute. I pushed send and headed for the bus that would take me to his neighborhood.

If you'd like to read more, you can buy the book here!
Posted by Annabeth Leong at 7:15 PM No comments: