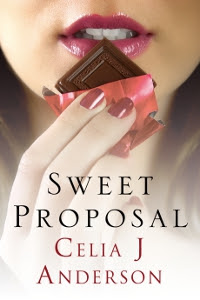 Love this cover, and this book sounds like a fun romp!

Books, chocolate and a Jacuzzi: could there be a better combination? Gorgeous Geordie Leo arrives in Clayton-on-the-Bream with a mission to make his mark. When he reveals his ideas for a bespoke bookshop and chocolate-themed cafe, struggling writer Mab can’t resist his plea for help.

However, Leo’s timing is disastrous. Engaged to flighty, super-thin Sophie and knowing that Mab is up to her neck in a mysterious scheme of her own, Leo fights hard to ignore the warm, sensual friendship that is growing between them. When their eclectic mix of family and friends weigh in to help, the dream seems almost possible, but can Leo ignore Mab’s shady past? As they battle with sabotage, jealousy, vindictive neighbours and unpredictable relationships, Mab and Leo find that even chocolate can’t always make miracles happen . . .

Leo swerved to avoid a dead badger. The A1 was still so quiet that groups of starlings rose in disgruntled crowds as he disturbed their breakfast, and the café where he had once eaten the best bacon sandwich of his life was firmly shuttered.

He gave in to the violent rumblings of his stomach and reached into the glove box, tearing the emergency chocolate bar open with his teeth and chewing until the bitter sweetness melted on his tongue, soothing and sensual. Chocolate and the future – they were closely linked in Leo’s mind. He sighed deeply. It was a pity that Sophie didn’t share his enthusiasm, but he supposed it was hard to get enthusiastic about a chocolate-based dream when all you ate was lettuce. Sophie was only twenty-five after all, ten years younger than Leo, stunningly beautiful and harder to amuse than a teenager on a family holiday. Maybe after they were married she would realise what a brilliant opportunity this move was going to be, and would be ready to leave Newcastle and her weird friends behind.

Stretching his legs, Leo decided that this cab must have been designed for a much smaller man. He yawned, felt his eyelids droop and blinked furiously, thinking of hot baths and strong coffee. He’d had no sleep for almost twenty-four hours. Celebrating was fine, but work would have to come first from now on. It was time for the Chocolate Project. The excitement that had been building up in waves washed over Leo again, and he gave the middle-aged lady driving towards him the full benefit of his flashing grin and dimples. He saw her jaw drop and laughed for the sheer joy of living – at last, Leo was about to make his mark, and no one was going to stop him.

When she’s not marking children’s work, or writing stories involving pants, Celia spends far too much time on Facebook (Celia Joy Anderson) and does a lot of walking to counteract the cooking, eating and drinking which form another of her hobbies. She blogs as part of the Romaniacs online writers’ group - http://theromaniacgroup.wordpress.com and tweets as @CeliaAnderson1. Her own website was recently launched thanks to Lucy Felthouse – http://celiajanderson.co.uk and she has an author page on Facebook (Celia J Anderson)
Her ultimate dream is to have her children’s books published too. Usually sea-starved in the depths of the Midlands, she can often be found wandering happily around Brighton visiting her two daughters and pretending to collect ideas for her next book.
Posted by Annabeth Leong at 8:00 AM