For Your Listening Pleasure 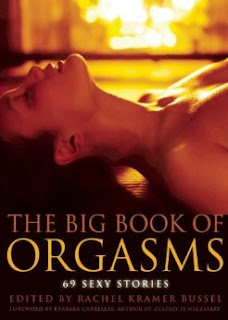 When I saw the call for submissions for Rachel Kramer Bussel's The Big Book of Orgasms, I thought immediately of her previous anthology Orgasmic, which I loved, and which was full of the broadest imaginable group of stories about orgasm. My favorite stories in that book were the ones about unusual ways to orgasm—there was a great horseback riding story and another called "Chemistry" about the effect of a favorite scent. I was intrigued by that, and wanted to write something along those lines.

As may be evident from my long history of music posts, I get turned on listening to music all the time. I used to go to bed every night and let The Only Time by Nine Inch Nails soothe me to sleep because there is this one gorgeous moment when Trent Reznor gets a catch in his voice and gives a little moan, and for many years that was the purest expression of sex to me.

I also remember nights of dancing when between the music and my partner my clit was throbbing in time to the beat. I remember the times I stood on stage with a bass guitar slung across my chest and I felt the sexual power flowing from me (no matter how meager the audience might have been). I remember the times I climbed into someone's tricked out pickup truck and the whole damn cab was vibrating, every bone in my body was vibrating, and the music was taking over every part of me and leaving me breathless.

It was the truck thing that made me wonder... I had a friend who had a tiny seat in the back of the cab that sat directly above an enormous subwoofer, and there were rumors about what that did to the girls who rode there.

I'd never tried to use bass notes to come, but most of the time when I'd had the opportunity, I was fighting the urge, not giving in to it. And so I came up with the idea for "All You Do Is Play," which appears in this anthology:

Sharon sighed, sinking onto the corner of her bass amp, stroking its black body and rubber insulated cords — one leading to the wall and the other to the red, pearlescent body of her bass guitar. Long hours of playing had made the habit strong. The bass was in her arms before she made a conscious decision to pick it up, her left hand sliding up its familiar neck and her right hand's stiffened first and middle fingers hovering over the strings.

This felt easier than anything, certainly easier than thinking about loneliness any more. She switched on the amp. It buzzed to life beneath her, humming and gently vibrating.

Sharon tuned the instrument and experimented with a few notes. They filled up the room, lingering in the air like smoke. She normally played standing, but her feet hurt after the hours in the club. Sitting on the amp, the notes came up into her feet through the vibration of the floor, and into her body from the movement of the amp beneath her ass. She grinned and played faster, lower notes.

The music settled between her legs and trembled there. Sharon's fingers sped over the instrument's thick strings, plucking them to keep the sensation going. She tilted her hips and squirmed, trying to guide the amp's stimulation more directly to her sex. She slipped, the corner of the amp pressing through her panties, rubbing the opening of her cunt.

Of course, I had to test this because I care about you, readers, and I wouldn't want to torture you with impossible notions. I quickly discovered that I could not give myself an orgasm with nothing but my bass guitar because, frankly, I do not have enough hands. It was way too hard to play the bass, move against the amp, and not fall over, all at the same time. This, however, was a surmountable issue, and simply called for further research. What I needed was someone else to hold the bass and play it.

Perhaps it will not be surprising that my partner eagerly agreed to serve this noble cause. I will not lie. It was tricky to pull this off. It took diligent effort and a bit of practice. In my story, I may have glossed over a bit of the trial and error. However, I can assure you that we were able to make this work.

I have seen some speculative reviews on Amazon, and I'm here to tell you that this approach to orgasm is kink-tested, partner-approved. :) That said, it did require some loud and somewhat unmelodious playing (I don't know, maybe some people enjoy rapid, jangly, bassy notes).

Bonus trivia:
The following line from the story was actually spoken by my partner during research: "You like the notes from this string the most!"

I've been excited to write this post for a while, because I think "All You Do Is Play" has the best behind the scenes info of anything I've written. While I believe in embracing the sexiness of writing erotica, that doesn't always call for such unusual pursuits (but just wait until I tell you about the testing I did for "Objects of Desire," forthcoming in another Cleis anthology—all I will say at the moment is that it involved a rolling pin).

If I've intrigued you and you'd like to read the rest of the story, you will also get 68 other fantastic stories for your money! This baby's got work from many of my favorite authors, including Cecilia Tan, Tenille Brown, Giselle Renarde, Xan West, Sinclair Sexsmith, Donna George Storey, Kay Jaybee, A.M. Hartnett... (Um, I guess I'll stop the list there, but I could keep going...).

Now, as Nelly says, "Somebody give me a bass line":

This is part of the official blog tour for The Big Book of Orgasms.
Posted by Annabeth Leong at 12:30 AM