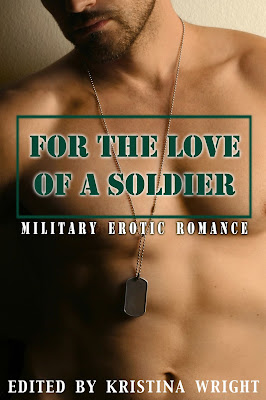 I mentioned that Kristina Wright's For the Love of a Soldier will be out at the end of the month from Circlet Press, and it includes my story, "True North." I thought I'd give you a taste of the story now.

Callie's father, who was a veteran, recently passed away. She relied on government services to bury him, and in the process met Rudy Andrada, a young serviceman who offers to help her. This scene is from the first time she sees Rudy off base.

When he showed up at my father's house, I was wound up tighter than the pair of pants I'd put on. I knew better than to dress like that for a day of hard work, but when I was getting ready in the morning, I couldn't stop thinking about Rudy's eyes, his strong jaw, his long, straight body. No matter how many times I tried to remind myself that he was too young for me, that he wanted to help me not date me, I couldn't convince myself to tie my hair into a ponytail and be done with it. Instead, I slaved over my eye makeup, and foolishly put on that pair of too-small pants.

Rudy unloaded a six pack and a two-liter of cola from the bed of his truck. "I didn't know whether you drink," he explained. I imagined how he would look tipping his head back to take a long swig from the bottle, its sweat dripping down the glass and onto the side of his hand, and my reaction informed me that I still didn't have myself under control. A man Rudy's age wouldn't want a woman like me, already weighed down by the grief of living. He'd come because he was a good person, trying to address a need he perceived. I convinced myself to hold back, thanked him for the drinks, and suggested we open the cola.

For the next few hours, he plunged into my father's world with me, moving boxes and furniture, cleaning the dust from corners, climbing onto a step ladder to wipe the blades of ceiling fans, and never complaining. I would have helped more physically, but the pants wouldn't really allow it. Instead, I wound up going through my father's files, looking for financial information or other papers that I would need to deal with. That job had been too overwhelming for me to start until then, but with Rudy in the house, I could take a deep breath and focus on one paper at a time. I didn't know what it was about him that steadied me, only that I couldn't have gotten through the task without his presence.

The newly cleaned fans did their best to cool the house, but the heat from outside pressed in, and my father had never bought an AC unit. Rudy pulled off his shirt at some point in the afternoon, the gesture casual, natural. It took my breath away. I came to a full stop, gawping. It wasn't just the perfect muscle definition running up his brown back. I was entranced by how close that warm, hard flesh was to the palms of my hands. With a few steps, a gesture, and a little boldness, I could touch it. It took a long time to unclench my fists, to swallow my desire, to go back to rustling through old papers.

Rudy accomplished more in one day than I could have in several. I asked him to stay for dinner, and did my best to show my gratitude, frying up steak and vegetables from my father's freezer, trying not to think about the other ways I wanted to demonstrate how I felt.

He was gracious, helping out however I allowed him, convincing me to share a little of the beer with him. Deftly opening one, he poured exactly half into a glass for me, then took a sip in just the way I had fantasized about.

I couldn't stand it anymore. When he came up for air and put the bottle down, I set aside my spatula and kissed him. He gave a surprised grunt, but when I pressed in tight against him, he responded, taking my shoulder blades in his big, strong hands and gathering me close. His lips were softer than I expected, his cock quicker to get hard. He tasted salty from the beer, and smelled of work and the remnants of the ocean-tinged cologne he'd put on that morning.

For a little while, he held onto me and let me kiss him, his mouth opening to my tongue, and his breath speeding up along with mine. Behind me, the pan hissed ominously, and Rudy was the one to break away and suggest I ought to pay attention to it.

I stirred haphazardly, my heart sinking when I turned back and saw his frown. "I don't want to take advantage of you," he said seriously.

I couldn't help laughing. "It seems a lot more like I'm the one taking advantage."

He bit his lip, the gesture reminding me again that I had a good eight years on him. "I don't want you to think you owe me."

I gestured toward the pan on the stove. "That's because I owe you." Feeling bold, I reached up and ran my thumb along his bottom lip. Now that I'd thrown my cards onto the table, the lust I'd been trying to hold back came forward in full force. There were plenty of things I ought to have been thinking about, plenty of reasons why that wasn't a good time to come onto him. None of that mattered since I'd kissed him."With this, you'd be doing me a favor."

He grinned at that. "I'm pretty sure I'd be getting something in return, Callie."

I began to ache between my legs. For weeks, I'd been in a gray fog of sadness and endless to-do lists. Now that I'd raised the question with Rudy, the world seemed vivid again, full of color that started with his eyes and spread everywhere else. "Do you want to?"

"You're talking as if he's about to come out and threaten you with a shotgun if you don't have me back by ten. I'm a grown woman, Rudy."

I couldn't sidestep what he was trying to bring up. I sighed, pressing against his chest again in an instinctive gesture that felt like it could all too easily become habit. "I don't think I'd be able to do this in the bedroom, but I do want you. We can do it right here on the floor, maybe." I punctuated the statement with a little downward tug, but he resisted. "The timing's a little weird," I admitted. "I didn't plan this."

He pulled at one of the belt loops of my tight pants, showing he'd noticed how I'd dressed. I couldn't help smiling at that. "Maybe I had some hopes."

"Sometimes, when people are sad, they act a little strange. Maybe do things that they regret later." His eyes seemed unusually far away, and I realized we still hadn't done much talking. For all that I had a sense for who Rudy was as a person, I knew almost none of the details of his life.

I stepped back and gave him a serious expression. "That sounds like the voice of experience."

He shrugged. "Guys I knew from basic training, that sort of thing." He cleared his throat and shrugged, the gesture dismissing entire worlds—the same things my father had been reliving with his war movies and his nightmares. "Sometimes, I didn't take it well."

"You're worried I kissed you because I'm not taking it well?"

He pulled me in, leaning his forehead against mine. His finger curled through the belt loop again. "I just don't want to ruin anything."

I blinked. "I didn't know we had anything to ruin."

"Maybe I had some hopes." He touched my cheek, his fingertips rough against my skin. I must have looked startled, or even scared. Much as I wanted him, I hadn't thought about what it would be like to really be with him, to make love with the lights on and introduce him to my friends, to have to risk the possibility that someday war might become too much for him the way it had for my father. "We can take it as slow as you want," he murmured.

I wanted to tell him that was all wrong. I didn't want to take it slow. I wanted to take it fast, to sleep with him right there and then try my best to forget about it all. I didn't realize my face was wet with tears until he brushed one away.

"Think about it," he said. "I can get an overnight pass next week."

For the Love of a Soldier comes out on June 29th.

You can preorder it at these links!

Also, consider joining the Circlet Press Patreon... You can get seriously ridiculous numbers of books through the offers there, for very low monthly pledges.
Posted by Annabeth Leong at 8:00 AM