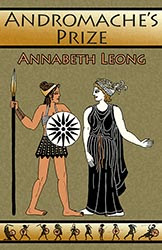 My newest release from Forbidden Fiction is out, Andromache's Prize, a dark story set in the world of Homer's Iliad:

When Briseis had belonged to noble Achilles, she had been better able to bear slavery. Now, though, the heroes have all sailed away home, leaving baser men to strip the carcass of Troy. Briseis has been given into the hands of cruel Calygdus, and nightly she suffers for his every shame and weakness — until Andromache and the women of Troy fall upon the Greek camp, slaying the men and releasing the women slaves, promising them freedom in the City of Women. Freedom — and love. (M/F, F/F)

(Be warned that while the story culminates in a lesbian romance, it includes disturbing scenes of nonconsensual slavery.)

You can find out more (including where to get it) here.
Posted by Annabeth Leong at 6:28 PM