Why Seal the Section? 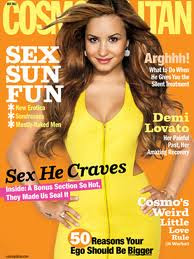 Cosmo made a big deal about the sealed section in its July issue, which was apparently "so hot, they made us seal it" -- according to the copy on the cover. I long ago learned not to get too excited about Cosmo's sex tips and articles, since they typically amount to "touch him on the penis:"

Not to mention that their idea of kinky is usually along the lines of bringing an ice cube to bed.

But I got curious about the sealed section. Who are "they?" Was there really some sort of legal requirement to seal the section? (Or was it a requirement passed down by an editor?)

The section turned out to be a set of articles and infographics on the penis. One in particular caught my eye and seriously undermined the claim that the section had to be sealed. That article discussed which term should be used to refer to the penis, mostly by weighing the merits of "dick" vs. "cock," and including a bunch of improbable foreign slang terms. But Cosmo didn't say "dick" or "cock" at all -- if they had, I suppose I might have understood the sealing. Instead, they said, "the d-word" and "the c-word," just as they do in this web post about the section.

I sat there way too long racking my brain, trying to figure out one thing that might require sealing. I saw no vulgar language, no images more risque than those in an underwear catalog, and no erotica. The section included one comedic essay a dude wrote about his penis and a bunch of research and infographics (of varied provenance) that I hope didn't require sealing, because they seemed mostly scientific. It covered ground similar to what I consider basic sex education, though with more fun presentation.

I was left hoping this sealing thing was just a gimmick, not a real requirement. If some legal or financial authority truly made Cosmo seal the section, then the state of sex education in the United States is even sadder than I feared.
Posted by Annabeth Leong at 8:00 PM