Today, I'm pleased to welcome the fabulous Lisabet Sarai, here to give details and an excerpt of her latest book, Nasty Business! 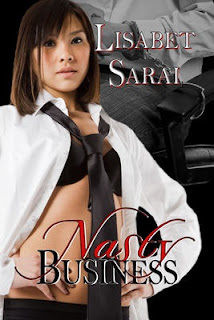 All's fair in lust and business

Ruby Maxwell Chen, lovely and ruthless CEO of a huge British business empire, is used to getting her way. When she encounters the strangely charismatic American entrepreneur Rick Martell, though, she wonders if she hasn't finally met her match.   From the trendy clubs of London to the Hollywood Hills, Ruby and Rick compete for ownership of a strategic factory in Malaysia. Neither has any qualms about using sexual wiles to smooth the path to success. Neither anticipates that their mutual attraction will turn into something far more intense and difficult to control.  As their struggle for dominance escalates, they draw their employees and associates into their outrageous power games. The stakes could scarcely be higher, as Ruby and Rick play for the ultimate prize: a night of total physical surrender.

As good as I am at this game, I'm finding it difficult. I know, intellectually, that ignoring her, pretending to honor my promise, will heighten her frustration and ultimately, weaken her defenses. If I came on to her, she'd resist. By seeming to hold back, I draw her to me.

I can feel the arousal emanating from the trim form strapped into the seat next to me. Her body language speaks volumes, though she struggles to silence it. She's dying to have me touch her, or to touch herself.

The problem is, I have to struggle myself not to reach for her. I have to resist this nearly overwhelming urge to slide that designer skirt up her slim thigh, exposing her smooth flesh. My fingers itch to stretch across the console and tweak those ripe nipples poking through her blouse. My half-hard dick presses uncomfortably against my zipper.

I watch the pavement twisting in front of my hood. I push the roadster a bit harder. Obedient, she races around the curves, graceful and powerful. An extension of my body, my will. Ruby's lips are parted. Her hair has come free from its clasp and flows around her face in jet waves. I want to control Ruby the same way I control my car. I want to feel her respond when I press the pedal a bit closer to the floor.

A sideways glance tells me that she's looking at me. I risk a few seconds of inattention to turn and grin at her lasciviously. "Take off your blouse, Ruby. Go ahead, you know you want to." The wind tears my words away, but I know she hears me. There's defiance in her eyes, mixing with the lust. "Come on. I dare you."

A contest, then. Briefly, emotions war on her face. Her lust wins. She smiles at me, provocatively.

"Keep your eyes on the road, Martell. You'll get us killed."

She's right. I switch my focus a second too late and barely miss grazing the inside guard rail. When I can afford another look, she's naked to the waist. Her fingers are torturing her plump, rosy nipples. Even in that quick instant, it seems that I can see them thicken and grow darker as blood surges into them.

Now Ruby cups her flesh in both hands, kneading, stroking. Her breasts are pale, perfect hemispheres tipped with flame. I would have thought the wind would blow her scent away, but no, her musk permeates the open car. My cock stirs and demands to be set free. I look back at the road, my heart slamming against my ribs as another curve whistles by.

My next glance shows me her parted thighs. She fidgets on the leather upholstery, though her hands are still massaging her tits. Crudely, I jerk my thumb upwards, then wiggle my middle finger at her.

She is already pulling up her skirt, not waiting for my suggestion. Looking me straight in the eye, she spreads her legs wide, pulls her panties out of the way, and sinks four fingers into her glistening cunt.

My dick jerks to full attention. I watch, fascinated, as she grinds herself feverishly against her hand, pummeling her clit, pinching those scarlet lips until they are almost purple. Her eyes are shut. Her back is arched, pelvis thrust forward to provide maximum access. She's a tiger, tearing at her own flesh in hungry fury. Her scent rises around us, drowning out the eucalyptus that always lingers in the southern California air. There's an ache in my chest that mirrors the one in my cock. I've never wanted anyone so much.

At the last minute, I swerve, barely avoiding the shiny Cadillac coming at me from the other direction. Adrenaline courses through me at the near miss. Ruby doesn't even notice.

There's a turn-out ahead. Hands shaking, I pull into the semicircular parking area and shut off the engine. Now I can hear Ruby as well as see and smell her. She moans and cries as she thrashes around on the seat. Her mouth is open, her teeth clenched. She sounds as though she is in pain. Her harsh grunts become rhythmic and rise in pitch as I watch her ascend the final slope to her climax.

I stroke myself through my trousers, in time with her climb. I'm back in control, turned on but pacing myself. I know that I'll get what I want eventually. Ruby twists and writhes. Both her hands are deep in her cunt. Her juices run down her wrists. It's unbelievable how hard she is on herself. I remember her flogger, wish that I had it with me now. She wouldn't even feel it, but it might help her over.

Then, without warning, Ruby screams and arches up off the seat. Her whole body convulses, then abruptly collapses. Little tremors continue to shake her frame for long minutes. Her eyes are closed; she seems unconscious.

She looks fragile, porcelain skin misted with sweat, tangles of hair stuck to her forehead. I suddenly want to take her in my arms, cradle her, brush those tangled locks away and kiss her eyelids until she awakens. At the same time, I have a perverse urge to loose my cock and sink it into her passive, defenseless flesh. To finally make her mine.

Lisabet holds more degrees than anyone needs from prestigious universities who would no doubt be embarrassed by her chosen genre. She loves to travel and currently lives in Southeast Asia with her highly tolerant husband and two cosmopolitan felines. For more information on Lisabet and her writing visit Lisabet Sarai's Fantasy Factory (http://www.lisabetsarai.com) or her blog Beyond Romance (http://lisabetsarai.blogspot.com).
Posted by Annabeth Leong at 10:22 AM