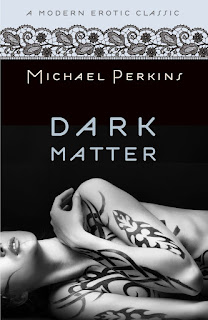 I've got a great excerpt of Michael Perkins' new release Dark Matter here for you today. Read on!

Gods, from your rocky home in the highest snow-capped Sierras of the imagination, swoop down now on San Francisco, the City of Perpetual Indulgence.

Blot out all other sounds from your hearing and attend to the dark passage of one in your indifferent keeping — one touched by you, and like you,possessed....

Yet another turn of the wheel, another rotation of the earth: darkness is cast like a spell. A night without fog.

Straddling her snorting, fire-breathing Harley, Robin Flood roars up the steep undulating streets that slant to the sky and then down them to the Bay. She cuts a loud eructative path through the Marina and rumbles into stern Fort Mason, a former military facility converted into a cultural centre with shops, museums and a famous restaurant.

A bleached full moon leers down at her, one roguish lunar eyebrow cocked; clouds of galaxies extend from it into forever. The dark matter that makes up the unseen universe holds the stars apart. The Gods pay casual attention.

It is the beginning of November, final year of the century, on the night of the Spiral Dance — a Saturday night that falls on Samhain, when the dead pierce the veil that hangs between breathing and not, children who will never die (at least not in the twentieth, accursed century) eat sugar skulls, and a thousand boisterous pagans gather to celebrate the disappeared.

Robin joins the crowd cloaked in the exclusionary circle she draws around herself with strangers. She does not know anyone in the laughing, gesticulating, highspirited gathering of animals with horns, birds of prey, devils of all designs, medieval jongleurs, Green Men, maenads and vampires. Here, New Agers rub shoulders with Dark Agers. Here, imagination expresses the divine with profligate abandon.

Robin regrets momentarily that she has not worn a costume, but her eyes attract more attention than a mask would: they are an unfathomable cerulean, like the sea. Her glance when unguarded can be frightening in what it reveals of the cold wildness inside. Her features are small and finely chiselled, her mouth wide and lush. Her hair is cropped like glossy black feathers. One seashell ear is studded with five expensive earrings, the kind ear-nibblers cut their lips on. She’s prettier than the Queen of Heaven tonight, but there is something indistinct, unformed, indefinable but dangerous about her, as if she might be willing to do anything.

Hidden behind their masks, people stare at her. Aware of the impression she makes, she tucks her ambient rage in a pocket of her black motorcycle jacket and grins like an ingenue on crack. She waits patiently in the line, examining everyone for signs of the roles they might play in the drama of her life. She has a hunger to find out who she is, and she can only learn this from others; she is unknown to herself. Tonight her whim is that she is a temple prostitute come to worship the Goddess, weep for her dead, and party down with the pagans. Her fantasies are usually realised.

The motley line snakes around the pier to Herbst Pavilion, a giant former troop embarkation shed surrounded by choppy Bay waters. The huge space is sombre and magnificent, a maritime cathedral filled with the anxious ghosts of the hundreds of thousands of apprehensive young men who passed through the building on their way to war, and the unhappy spirits of those who never sailed home. It is an appropriate place to celebrate Halloween.

MICHAEL PERKINS is the author of six collections of poetry. The Secret Record, literary criticism, was published by William Morrow in 1976. The Good Parts, selected book reviews, appeared in 1994. Among his other works of fiction and non-fiction are the novels Evil Companions, Dark Matter and Burn. His poems and essays have apeared in The Village Voice, Younger Critics of North America, The Nation,Mother Jones, Paper, Notre Dame Review, Exquisite Corpse, Big Bridge, Talisman, Rain Taxi andAmerican Book Review. He was the Leydig Trust's Writer of the Year in Great Britain in 2002, the recipient of the 2007 Obelisk Award for Lifetime Achievement and the 1957 Dunbar Poetry Prize. Carpe Diem, New and Selected Poems, appeared in 2011.

The Houdini Girl by Martyn Bedford
Lie to Me by Tamara Faith Berger
The Phallus of Osiris by Valentina Cilescu
Kiss of Death by Valentina Cilescu
The Flesh Constrained by Cleo Cordell
The Flesh Endures by Cleo Cordell
Hogg by Samuel R. Delany
The Tides of Lust by Samuel R. Delany
Sad Sister by Florence Dugas
The Ties That Bind by Vanessa Duriés
Dark Ride by Kent Harrington
3 by Julie Hilden
Neptune & Surf by Marilyn Jaye Lewis
Violent Silence by Paul Mayersberg
Homme Fatale by Paul Mayersberg
The Agency by David Meltzer
Burn by Michael Perkins
Dark Matter by Michael Perkins
Evil Companions by Michael Perkins
Beautiful Losers by Remittance Girl
Meeting the Master by Elissa Wald
Posted by Annabeth Leong at 6:56 PM