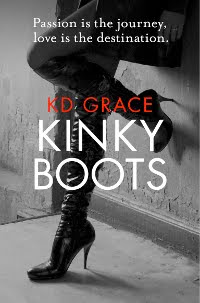 God knows I am a sucker for some kinky boots. Count me in! Here's some info to match that hot cover (and, by the way, I wouldn't mind a link to the shoes that model is wearing...)

After a sizzling encounter in DEMON HEELS, a quirky all-night shoe store, with the store’s hot owner, FINN MASTERS, JILL HART walks away in the most gorgeous boots ever. Her new boots come with an unexpected bonus, a sexy demon named ELEANOR, who’s looking for a good time. All she lacks is a body, and Jill’s will do nicely.

With Eleanor in residence, Jill’s bolder, sexier, willing to take risks. But is she a whole new Jill, or is it just demon courage? And how will Finn feel about her when she’s just plain Jill again? Will the maddeningly magical ménage make Jill’s dreams come true, or will it break her heart?

More links will be added here as they become available.

There was a soft knock on the door and Meinrad entered the room with several hanks of what looked like ordinary rope. He nodded his greeting to Finn, then his gaze came to rest on Jill, and she felt her entire body blush at his inspection. ‘Turn around,’ he said.

He made some sound low in his throat that could have passed as either approval or not. Then he placed a large hand on her shoulder and turned her back to face him. She noticed he wore the Kinky Boots uniform T-shirt stretched tight across his very broad chest. The shop name was punctuated by the hard pressure of nipples on muscular pecs. The black jeans he wore rode low on his hips. The wave of lust that rushed over her was staggering. How had she not noticed how sexy he was?

He stood gazing down at her from some neutral distance that made her feel very much alone, as though the world and everyone in it had receded, leaving her to await her fate. Eleanor was keeping a low profile. Finn spoke without preamble. ‘Unless something’s hurting you, while Meinrad’s binding you, you’re not to speak. You’re only to move when he moves you. You’re to do exactly as he says. You’re to accept what he does to you in total passivity. Is that clear?’

‘Is he going to fuck me?’ She was embarrassed the minute she said it but it was too late to take it back.

If Finn wanted him to. Dear God, what was she doing? Suddenly she felt unsteady on her feet. She didn’t know Meinrad. Not like she knew Finn. And yet the thought of the big man hammering her with his enormous cock while she was all trussed up was at least as exciting as it was uncomfortable. The thought that he would do so only at Finn’s bidding excited her even more.

‘There’ll be no safe word,’ Finn continued. ‘All you have to do is tell Meinrad to stop. Or if at any time he thinks you’re not fit to continue, he’ll stop, and that’ll be that. Are we clear?’

She nodded. ‘And what about you?’

‘Meinrad’s acting on my behalf.’ Finn held her in a cool gaze. ‘He’ll do as I say, and so will you, unless you choose at any point not to play.’ For a long moment he studied her, as though he might see something, perhaps some flaw, perhaps some weakness, she didn’t know what. He seemed too far away to tell. She held her breath. Waiting.

At last he blinked and stepped back, still holding her gaze. ‘I’ll ask you again, Jill. Are you sure this is what you want?’

She nodded, afraid to speak for fear her heart would jump out of her throat. Then she remembered to breathe again.

Finn said nothing. He took her hands in his and offered them to Meinrad, who took both her wrists in one huge palm and tied them across one another in a simple looped knot from which she could have easily escaped if she’d wanted. Then he led her to the bed and guided her onto it. There, he secured her hands to the headboard with several feet of slack, enough to allow him to work around her and at the same time allow Finn to observe from every angle. A quick glance over her shoulder revealed Finn had pulled a ladder back chair to the side of the bed and sat emotionlessly looking on. A quick glance was all she got before Meinrad settled her into a kneeling position facing the wall with her hands resting on the headboard.

In the beginning, it felt as though she were being decorated with rope; that’s the best way Jill could describe what Meinrad was doing to her. The rope was softer than she expected it to be and not unpleasant against her bare skin. The embarrassment she felt came, flashed hot, then passed as Meinrad looped the rope and efficiently placed knots above her breasts and then below and then tightened and cinched his efforts until the harnessing effect squeezed and pinched and offered up each of her breasts in a tight little nest of rope, like ripe fruit topped by the cherry-hard rise of her nipples. She’d always had sensitive breasts and to have them so handled and bound made her whole chest burn with a need that was replicated in her pussy.

Meinrad worked in complete silence, his hands moving over her body as though she were nothing more than the canvas for what he was creating. His touch was exacting and his rhythm as he worked was hypnotic. Early on she realised that one of his hands was on her at all times. She remembered basic knot training from her childhood days in the Girl Guides. Right over left and under and through. Left over right and under and through. Rope threaded through competent fingers, rope slid over bare skin, coiling, twisting, binding, descending right over left and left over right, pressing a column of knots down the length of her spine before looping around her waist and embracing her belly. Again. And again. Yes, she was his canvas, and what he created took its shape against her flesh, but his art didn’t happen without exacting a price from him, and in her peripheral vision, as he reached around her to secure a knot over her navel, she caught a glimpse of the erection set tight in his black jeans, and she felt the hitch of his breathing not quite hidden in the rhythm of right over left, left over right. As he crossed the ropes around her body, she felt the heat of his breath whisper along her back next to the weaving and twisting and soft swishing of the rope along her spine.

With a tug of the rope every pore of her body responded to the tightening just as he nestled a knot against the pucker of her bottom and her gasp sounded like a rush of wind in the stretching silence. Meinrad gave a little pull and her clit hardened in empathy with the pressure between her buttocks. Then without warning, he slipped an arm around her and turned her over as he pulled two strands of rope up between her legs, up tight against her upper thighs like the elastic of knickers, or a tightly cinched climber’s harness. That done, with a deft movement of his fingers he secured a knot just over her clit, and this time she cried out in the strange mix of discomfort and arousal. The whole gape of her was pressed between the two strands of rope, knotted at fore and aft like a ship, narrow and thick-hulled.

There was barely time to get used to the strange rub and pressure between her legs, or the knot that felt like the tip of a thick finger attempting to breach her bottom, before Meinrad began to bind her thighs to her lower legs and ankles, making the position in which she knelt mandatory. With each knot, with each looping of the rope, he forced her bent legs further apart until she was wide open, yet at the same time held closed by the ropes between her legs. Bound and kneeling on the bed, she tried to breathe deeply, tried to fight back the panic of her own helplessness, something she had never experienced before. She was dangerously close to hyperventilating, and Eleanor seemed to be completely absent from the whole event.

‘Shall I continue?’ Meinrad asked.

K D Grace believes Freud was right. In the end, it really IS all about sex, well sex and love. And nobody’s happier about that than she, cuz otherwise, what would she write about?

When she’s not writing, K D is veg gardening or walking. She walks her stories, and she’s serious about it. She and her husband recently walked the Coast to Coast route across England. For her, inspiration is directly proportionate to how quickly she wears out a pair of walking boots.