Guest Post: A.M. Hartnett on Here For A Good Time 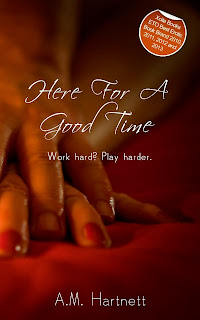 I'm very pleased to welcome A.M. Hartnett to my blog today, talking about her latest release, Here For A Good Time. We've been anthology friends several times, and she has an awesome blog (The Bewildered Writer), writes awesome stories, and somehow makes her heroes sound so real that I get jealous that mine don't seem quite that forcefully alive. I asked her to tell us about the scene that defined this work for her, and she's come through with exactly the sort of story that makes me a little envious.

Without further ado, I'll pass the floor to her!

When Annabeth suggested I talk about that moment when the story clicked into place for me, I knew exactly the moment of the story that this happened.

Like most of the stuff I've published, Here For A Good Time languished in my to-do pile for years. Every so often I would pull it out and have a look, but I'd just get so frustrated and overwhelmed with trying to make it happen that I'd close it and move on to something else. For the longest time, poor Alexis sat on the balcony of The Deveaux resort hotel, waiting for something to happen.

The next scene was the scene. Goodbye Mr. Kendrick, hello sexytimes with the bossman, but when it came time to put Alexis in the backseat of a hired car with her boss, guess who jumped in with her?

I tried to backtrack. I tried to push him into the background, but he wouldn’t budge. This was his conquest, his woman, his story, and I could either go with it or go write something else.

Kendrick brushed past her and pulled open the door of the taxi.

She smiled, the picture of politeness, but inside she simmered. The rest of the team had already piled into the other two cars and were headed down The Deveaux’s long driveway. Kendrick had been the last to come down the steps, and so it would just be the two of them on the ride over.

As their car motored towards the main road, she suffered throb after agonising throb at the thought of his tongue snaking around her clit. She squeezed her thighs together and tapped her watch impatiently.

The cab merged with traffic. Kendrick nudged her knee with his. ‘What have you been doing to amuse yourself since I left?’

She loved the naughty tone in his voice and had to bite down on her giggle. Though still insufferable, he had certainly grown on her since that afternoon.

Alexis was grateful for the shadows in the back of the car. Her cheeks caught on fire as his question brought a sudden surge of recollection: long fingers stroking her G-spot and a hard cock filling her mouth.

She shook her head and let her hair fall over her eyes. ‘I’ve been a very good girl, Kendrick.’

‘Jesus, I wish you’d stop calling me Kendrick. I have a name.’ He moved closer, arm sliding around her shoulders to pull her closer.

‘I’ve been calling you Kendrick for almost three years now. I’m not likely to break it after – so soon. Besides, you insist on calling me Miss Shea.’

‘I think I’m going to have to come up with some more creative names for you now.’ He nuzzled his face into her hair. ‘After the way you sucked on me, “Lollipop” seems fitting.’

‘Shush.’ She turned and found her mouth sinfully close to his. ‘The driver …’

‘I’m sure he’s heard worse.’ Kendrick’s hot breath skittered across her chest and drew gooseflesh to the surface. ‘You’re the sexiest damn thing I’ve ever seen.’

‘I’m glad you approve, but it is pretty tame.’

‘Bullshit. Those are fuck-me shoes if I’ve ever seen them. Makes me want to give you a little something to keep you satisfied until after dinner.’

A smudge of shadow shifted, and then there was his hand on her ribs. She brought her hand up and pressed it against his chest. Sensation sizzled along her arm as her fingertips brushed the curls where his shirt was open at the neck.

When Alexis booked her work retreat at The Deveaux, the most she had to look forward to was a bit of spa time on the company dime, but flashy salesman Chris Kendrick has an even better suggestion. For years they’ve had a hot and cold working relationship with a bit of flirting mixed in, and now is the perfect time to get that spark out of their systems.

Three days hopping in and out of beds (and other convenient places) shows Alexis that Kendrick’s smooth demeanour is more than just talk, and that aromatherapy and soft-tissue massages have nothing on Kendrick’s firm hand.

A.M. Hartnett began writing in 2006 and has published more than thirty short stories. Her work has appeared in more than a dozen anthologies, including Cleis Press’s Sudden Sex: 69 Sultry Short Stories (Ed. Alison Tyler), and The Big Book of Orgasm: 69 Sexy Stories (Ed. Rachel Kramer Bussel). She has also written three novellas and a novel as Annemarie Hartnett. For more information on her publications, please visit www.amhartnett.com

Yeah, after that excerpt I'm a goner. Why did Amazon invent one-click purchasing?
Posted by Annabeth Leong at 12:30 AM