New Story Coming Soon: "A Change of Perspective" in Silence is Golden 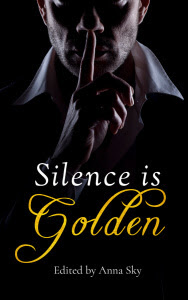 I signed a contract last week for a new queer story, "A Change of Perspective," which Sexy Little Pages will publish in their forthcoming Silence is Golden anthology.

The book will be full of kinky stories involving silence in some way. In mine, Maddie takes on the role of Max in order to take her best friend to a kinky party on a collar and lead. Though Maddie has topped before, she's never gone out publicly presenting herself as male, and she chooses to remain silent so the sound of her voice won't disrupt her sense of herself as Max. The change of perspective unleashes powerful desires—for her identity, in her kinky life, and for her best friend.

I believe Sexy Little Pages plans to release the book in the near future, so you won't have long to wait to read the story. In the meantime, though, you can check out the first story I published with them: a tattoo-themed lesbian first time story called "Scissoring," in the Inked anthology.
Posted by Annabeth Leong at 6:53 PM