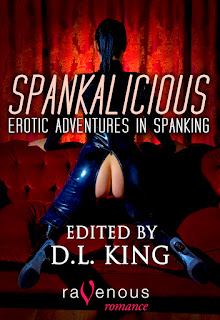 My contribution, "A Cure for Excess," is about how hot couple Jesse and Rebecca help Shannon deal with a libido that's previously earned her criticism from her exhausted lovers. Here's an excerpt:

He stepped out into the living room, light from the bedroom spilling out to illuminate his tall, naked body, and his long, erect cock. Shannon’s mouth watered at the sight of him. Rebecca followed a second later, a blanket wrapped around her slim curves. She leaned in the doorway, smiling, watching Jesse advance on Shannon.

“What are you doing out here?” Jesse asked.


Pick up a copy of the anthology to read the rest!
Posted by Annabeth Leong at 11:54 AM